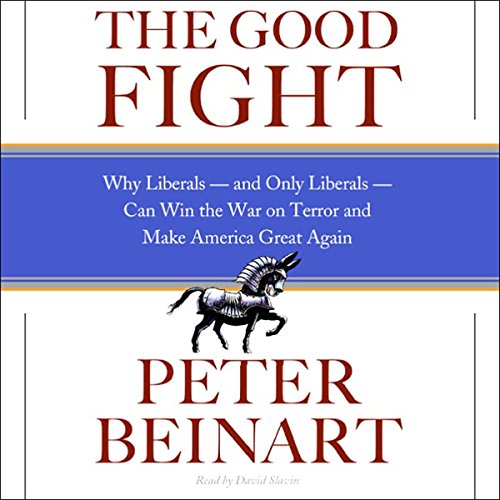 By: Peter Beinart
Narrated by: David Slavin
Try for $0.00

Once upon a time, liberals knew what they believed. They believed America must lead the world by persuasion, not command. And they believed that by championing freedom overseas, America itself could become more free. That liberal spirit won America's trust at the dawn of the cold war. Then it collapsed in the wake of Vietnam. Now, after 9/11, and the failed presidency of George W. Bush, America needs it back.

In this powerful and provocative book, Peter Beinart offers a new liberal vision, based on principles liberals too often forget: That America's greatness cannot simply be asserted; it must be proved. That to be good, America does not have to be pure. That American leadership is not American empire. And that liberalism cannot merely define itself against the right, but must fervently oppose the totalitarianism that blighted Europe a half century ago, and which stalks the Islamic world today.

With liberals severed from their own history, conservatives have drawn on theirs, the principles of national chauvinism and moral complacency that America once rejected. The country will reject them again, and embrace the creed that brought it greatness before. But only if liberals remember what that means. It means an unyielding hostility to totalitarianism, and a recognition that defeating it requires bringing hope to the bleakest corners of the globe. And it means understanding that democracy begins at home, in a nation that does not merely preach about justice, but becomes more just itself.

Peter Beinart's The Good Fight is a passionate rejoinder to the conservatives who have ruled Washington since 9/11. It is an intellectual lifeline for a Democratic Party lying flat on its back. And it is a call for liberals to revive the spirit that swept America, and inspired the world.

"[A] stimulating manifesto....[This] provocative analysis could stir much-needed debate on the direction of liberal foreign policy." (Publishers Weekly)
"The Good Fight is a bracing read, a good two-fisted polemic intended to stiffen the Democratic spine. Mr. Beinart, although reasonable and judicious, knows how to lay out an argument." (The New York Times)

What listeners say about The Good Fight

This book is a very good combination of history and current events. The author provides well thought out explanations of why liberal foreign policy was so successful in the early Cold War, and why the tradition fell into pieces in the late 1960s and beyond. He also provides a good theory for liberals and progressives to regain what, in a way, they only forgot but never actually lost: their understanding of the world, and their ability to create and pursue foreign policies that benefit America and the world.

This book is relevant, due to the comparability of the current post-9/11 period with the late 1940s and the height of progressive internationalism and Trumanism. In both cases, conservatives had proven (even if in different ways) that they did not understand the world and did not know how to fix its current problems. The author is correct that liberals must regain their foreign policy greatness, not for themselves, but for America and the sake of the world.

Sophistry at its best

Peter Beinart makes a persuasive case for getting today's liberals in touch with the realities of the world, namely that global terrorism is the real enemy of our liberty, not George W. Bush.

Nonetheless, Beinart just can't help himself but make Bush the "evil" one throughout most of his discourse.

But the most revealing passage of Beinart's research is found on page 187:

"...the Center for American Progress and the Century Foundation asked self-described liberals and conservatives to rate their top two foreign policy goals. Conservatives were 26 points more likely to mention denying nuclear weapons to hostile groups or nations, and 24 points more likely to mention capturing Osma bin Laden. In fact, while conservatives, and Americans in general, cited destroying Al Qaeda as their highest priority overall, for liberals, it was tied for tenth."

By Beinart's own research, liberals are out of touch with what the American people are worried about. I applaud Beinart's efforts to get liberals to address this vital issue but I doubt he'll have much success because even he can't seem to avoid making Bush his real target.

I would recommend the book, however, as Beinart does make a compelling case for liberals to wake up to this reality if they ever want to win a national election again.