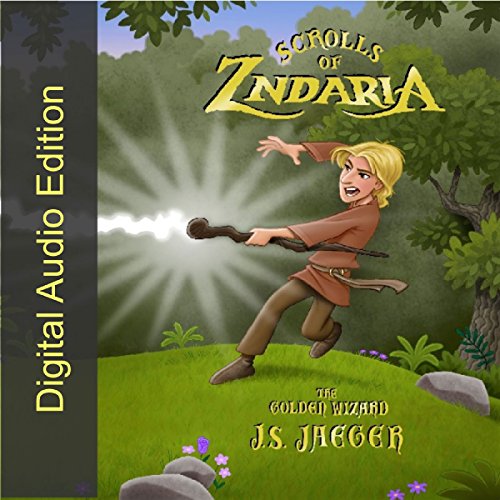 A magical world at war. Will an unlikely hero emerge?

Nate wants to become a wizard - the highest warrior in the king’s army, but peasants aren’t selected to study magic.

Embarking on a journey to make his own destiny, Nate faces Dread Vikings, malicious bounty hunters, and a vicious beast. Each challenge tests his endurance. Each obstacle pushes him further.

Stories arise of an evil king advancing across Zndaria, destroying any who resist. None know how to stop him.

When the war comes to Nate’s kingdom, can he prove he’s worthy to fight as a wizard? Will his kingdom be the next to fall, or will his impossible dream turn the tides of war?

What listeners say about The Golden Wizard

A true MG family - fun adventure!
Omgoddess! I absolutely LOVED this gem!
The world building was a flawless storyboard and setting for a young wizard wannabe. It shows youngsters how to dream big and go for it! You never know, until you express interest and ask.
Feeling confident, Nate knows what he wants, and fumbles through hurdles and loss.
The characters become friends and their warmth flows from the book through the narrator (who was GOLDEN, too!) to the reader.
The Golden Wizard will be a timeless classic for this upcoming generation.
I'm so pleased to have added this audio to my listening library and am soo anxious for my granddaughters to get older so I can share it with them!
A thousand stars and thank yous to the authors, who gifted me with book. This review is freely given and my opinion is from the heart.
Keep writing (and recording) and I will follow!

Amazing introduction to the world of Zndaria!

As I started the audio book with my 16 year old son, I was not sure that we were the target audience. As we continued to listen, we got sucked in and became invested in the story. We were sad when the book was over and can't wait to find out what happens next.

The story was well written and takes you on a magical journey with Nate, a 15 year old boy who is bullied and stutters. Nate dreams of becoming a wizard, but in his land a peasant has never been chosen to be a wizard. Despite the odds, Nate gains favor with the red wizard and is selected to embark on an action-packed journey. the whole while you wonder if he will be able to overcome his shortcomings to become a wizard. The authors, J S Jaeger, have told a great epic in just the first book in the series. The dialogue is brilliantly done by RJ Walker, the narrator, who helped to bring to life a tapestry of interesting characters who are not all as they seem. The story has a few larger vocabulary words, which are explained in the text of the story quite well. I enjoyed the laughter and tears in this story which is sure to hold any ones interest. The narrator uses accents and inflection to convey various characters, but the same accent is used for the elves or trolls, ect. to show which type of creature is speaking. I thought this was an excellent touch. There are lots of pearls of wisdom in this story of overcoming adversity. I think it is a good book for those readers/listeners who might be dealing with bullying or striving toward a goal or even those who have experienced loss. While the book is for a middle school reader, it can be easily read by older readers with a lower reading level or by younger readers with a higher reading level. As it is not watered down nor condescending in any way. It is a great introduction into the world of the sci fi/ fantasy genre. It could easily be used as a summer reader.

The authors, J S Jaeger, wove the story seamlessly. There are no choppy or left out bits and in the end it doesn't leave a major cliff hanger making it not only the start to a great series , but also an awesome stand alone book as well. The characters, while mythical, are believable and most are well rounded with complex personalities. It has a few plot twists that helped continue interest and suspense. It is a fun story, which was enhanced by the audio. The narrator, JR Walker, was able to bring each character's unique personality to light while continuing to maintain an accent designated to each creature. He spoke for both girls and boys in this story and with changes in his voice was able to convey who was speaking and their emotional state. He really made the story come to life. The audio was clear and the narrator spoke in at an easy to follow pace making this a great production as well. I will look forward to reading/listening to more books by these wonderful authors and this talented narrator.

I really liked the world building by Jaeger! They did such a great job with the characters and environment of this story. I felt easily connected to the characters and fantasy world they lived in. I also liked that though this was a middle grade story, there were still risks the characters were taking and things could very well end up horribly if the characters didn’t pull through. I give the novel a 5/5 stars.

The narration by Walker was good, but there is an issue with some of the female characters. They didn’t always feel like a woman talking. He did a very good job with Bela though! His tone was also even and the emotional scenes felt real. I give the narration a 4/5 stars.

I received this audiobook as part of my participation in a blog tour with Audiobookworm Promotions. The tour is being sponsored by JS Jaeger. The gifting of this audiobook did not affect my opinion of it.

This was a fun, straight forward tale that was easy to get into. I enjoyed the magic and the simple world building. The characters were a little one-dimensional but also suited the story. Nate is a likable kid on the cusp of manhood who seeks one adventure and gets swept up in something much bigger.

A variety of characters populate this story – it’s not just humans playing major roles. I especially liked Demon, a 2-headed chimera, and the relationship he builds with Blinkly and Nate. I was a little sad to see that the ladies were side-barred for much of the story. There’s Nate’s mom and a disgruntled older lady that have minor roles and we have to get deep into the tale before a woman makes her mark on the plot.

On the surface, it’s a typical good versus evil story. The Red Wizard helps Nate achieve his goal of apprenticing in magic (which is a boost his ego definitely needed as his family thinks of him as a silly daydreamer). I did enjoy the image of Nate’s brother Ted trying to ride a wild pegasus even as Ted has little regard for Nate’s dreams.

OK, so back to the Big Baddie and how the realm is in danger and eventually even Nate’s village is under threat. Even though this is a kid’s tale, I was glad to see that not everyone makes it out unscathed. Nate has the dead to morn, injuries to heal from, and yet more magic to learn. All told, 4/5 stars.

The Narration: R. J. Walker’s narration started off a little bumpy. His character accents skewed and mushed together in the beginning. When Nate was hanging out with Blinkly, he had an almost posh accent (which is what Blinkly has) but when hanging out with his brother Ted, it was much more Midwestern (though Ted sounds like a total hick, which is odd for 2 siblings to have different accents). Anyhoo, about halfway into the book, the accents stabilize and each character remains distinct. Sometimes Walker had a great voice for a female character (like ancient Bela) and sometimes his female voices lacked femininity. Still, he was an energetic narrator who obviously enjoyed what he was doing. There were no technical issues with the recording. 4/5 stars.

I received this audiobook as part of my participation in a blog tour with Audiobookworm Promotions. The tour is being sponsored by JS Jaeger. The gifting of this audiobook did not affect my opinion of it.

I lovely story that you don't have to be a kid to enjoy! Zndaria is a great new world with well developed characters. The storyline moved along and while there was no cliffhanger, there is definitely a basis for the story to continue. I look forward to seeing what's to come!