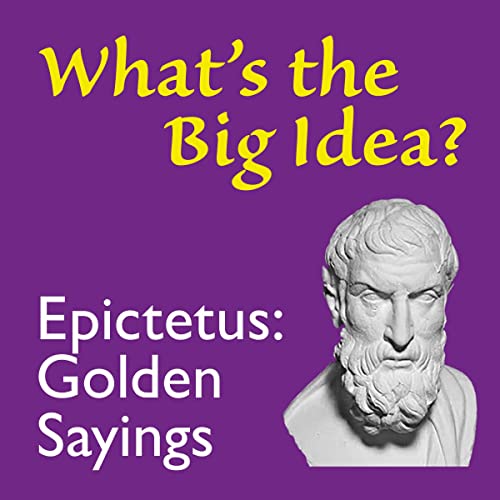 The Golden Sayings of Epictetus

By: Epictetus
Narrated by: David L. Stanley
Try for $0.00

What’s the big idea? Former slave Epictetus argues that since we cannot control the external world, true freedom comes from the reasoned control of one’s own desires and passions.

This is the core of stoic thought that Epictetus taught in Western Greece about 100 AD. Stoicism became the dominant moral philosophy of the Hellenistic and Roman world and Epictetus became its dominant and most respected teacher.

Though Epictetus wrote nothing that has survived, writer Arrian attended his lectures and took those notes that preserved Epictetus’ teachings. Besides Arrian, Epictetus had another notable listener, the young Publius Aelius Hadrianus, who would go on to become Roman Emperor Hadrian, reigning from 117 AD to 138.

Stoic philosophy echoed down the centuries, starting with St. Paul, whose “Acts” is shot through with Stoic thought. St. Ambrose and Tertullian show Stoic influence in their writings.

In the modern world, stoicism remains important. Prussian emperor Frederick the Great, essayist Montaigne and even George Washington were inspired by the Stoics. Perhaps the most prominent modern writer influenced by the stoics is American essayist Ralph Waldo Emerson. His Man the Reformer and Self Reliance are almost modern stoic handbooks.

Let’s go back a couple of thousand years to Nicopolis and listen to Epictetus explain Stoicism. We can cheat a bit and look over Arrian’s shoulder and read his lecture notes.

What listeners say about The Golden Sayings of Epictetus

A thoughtful edit and presentation of Epictetus

Bill McGann presents a concise overview of Stoic philosophy. He has thoughtfully edited and updated Epictetus's teachings to contemporary English. I highly recommend this book to anyone looking for am introduction to the stoic philosophers

With a global pandemic raging and political discourse at a new low, now is probably a good a time as any to dive into the teachings of Epictetus -- the philosopher at the core of modern stoic philosophy. Bill McGann has thoughtfully edited and updated Hastings Crossley's translation of Epictetus' thoughts (as originally written by Arrian around 100 A.D.), so the thoughts are far more accessible to modern readers.

I listened (on my wife's account) while riding an indoor bike trainer and found it to be an interesting overview of stoic philosophy. The sound is excellent (important in my case) and McGann's introduction nicely lays the groundwork for modern stoic thought. Stanley's narration is excellent.

For those with any interest in stoic philosophy, this is a very accessible way to access Epictetus' work. Highly recommended.