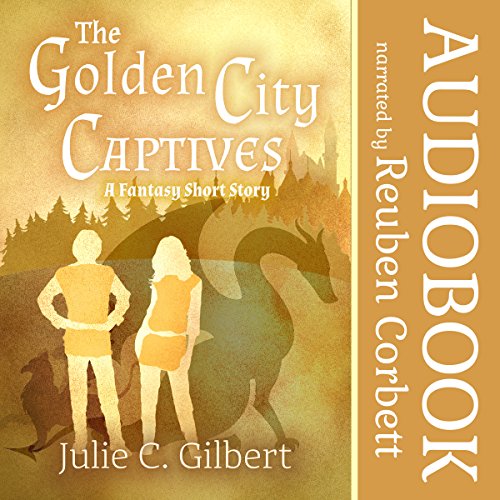 By: Julie C. Gilbert
Narrated by: Reuben Corbett
Try for $0.00

Keio's dream of seeing the Golden City turns into a nightmare. He and his friend, Clara, get swept up by Fire Fairies along with the other youths in their village. They're quickly sold to the local lord.

The man seeks something very special that only certain young people possess, and he's willing to threaten anyone to get it. But his daughter has other plans.

Like it or not, Keio and Clara land in the middle of a brewing war. They're going to have to pick a side soon, and if they choose wrong, their lives aren't the only ones forfeit.

What listeners say about The Golden City Captives

Men remove children from a village, together with a parent. They are taken to shed, bound and inspected.
A couple are kept, but the rest sent off to be sold as slaves.
What happens next is a thing of prophecy, which the writer has done a fabulous job of building suspense and drama, to give the reader (or listener) the best experience possible. I will not that experience away, by giving too much of a great story away.
The narrator also does a fantastic job, adding a further dimension to the overall experience.

Fairies in a different light?

Short story that had a nice thought out plot. Like many other good books it left me wanting more.

The twists the book takes can and likely will surprise you.

I enjoyed this book, as I have enjoyed many of different kinds of fantasy type stories. The Fairies in this book took on a different kind of view than others have which was quite interesting to see.

I felt like the story was mostly something I've read before. I enjoyed the fireflies, and what they could do, especially with the spiked armor, but otherwise, there wasn't much that seemed original to me. Also, in such a small space, you need fewer vague descriptions and ideas, and instead, pack this short period of time full of sharp and clear descriptions, and drop a lot of superfluous words and generic descriptions. Here are some examples. First of all, I don't know what the boy looks like, other than the color of his hair. "cast his gaze around" "A large kind woman" :brightly colored soft silks" "dark foreboding building" "delicate girl who swept gracefully in" Those word spaces could've been used for more specific descriptions. We never saw the black dragons until the battle. You get the gist. I just didn't have my 5 senses engaged, so I could not get immersed in the story. There were good moments, too, though, like when the wagon slid onto the city streets, the woman in red who pulled her child back in the window, the fountain/thirst. I loved the narration, and would probably seek out more that he's read, but there's something that he does that throws me off too occasionally, and it's that he pronounces the "a" as if it's being recited in the a b c song, not as how it's spoken. Same sometimes with "the." Hope that clears up. Loved the way he did the voices, especially the Lord's.

My 13-year-old son wanted it to keep going!

I had just flown 11 hours and my 13-year-old son and I were relaxing on the couch trying to fend off jetlag.

"Hey, want to listen to an audiobook with me? It's fantasy."

We were enjoying the story but we were called in by my sister for dinner.

"We can finish it later," I suggested.

"No, just a little more," he pleaded.

The beauty of audiobooks is that you can share them in real-time. I would never have known my son liked fantasy had we not listened to this story together.

I liked that it was short so we could have an idea of the characters and continue when the author continues the series (we hope!).

Enjoy it together with someone else, see what happens. :-)

I think this is a good fantasy novel for kids , it wasn't for me.

A fun little adventure without much substance

I requested and received a free copy of this to review.

A quick listen, this story is a fun mix of various familiar elements with a bit of a new spin on them. I really wish it had more time to build up and expand, as it is it was over so quickly there's little to say. There were a lot of potentially interesting characters crammed in there, and a deeper story that could've been told, but as it is it rather feels like a prologue to another story which was expanded into a novella, or the outline of a full novel crammed down to fit.

I enjoyed what there was, but it left me unsatisfied and uncertain of the author's intent. Is it intended as a standalone? If so, it is definitely lacking. A teaser for a longer series? I'd expect more focus on making us care about the characters involved, in that case. So what was the point of it? I really have no idea.

But if you're looking for a quick fluff of an adventure, with fairies and shapeshifters, dragons and evil rulers, this might be what you're after.

I really liked the narrator a lot. He brought the story to life. It's a good story and I enjoyed it a lot. I would've just liked a bit more character development, so I could feel more invested in the story. It felt. little short and like it could've been much more with a bit more length. Still, a great story for kids.

Keio wants nothing more than to see the Golden City. That dream quickly turns into a nightmare when he and a friend are taken captive and sold to an aristocrat. I really enjoyed this book. it's very short and to the point. It's a quick and easy read. I do kind of wish it was drawn out a bit more, but that's just me being picky. The story was a bit too short to really form a connection with the characters. However, I believe that Sarah was pretty amazing. I'd of liked to have gotten to know the characters a bit more so I can make a sound judgement on any of them. Reuben Corbette did a pretty amazing job narrating this book. He added to the enhancements of feeling like you're actually there. I can't explain it better than that. I also happen to adore his proper voice. I really enjoyed this story. I just wish it had been a tad bit longer. I feel like there should have been things that were just drawn out a bit more. I feel like it would have helped the connection with the characters and the story very much.

I received this book free and my review is voluntary. The story was nice and sweet but very quick. So much happened and i felt like it was rushed. It was a good book just quick.

After listening to this story,. I totally enjoyed reading this book. It’s well written and the characters were uniquely fantastic. I would suggest this book to my friends that like this sort of genera. this was a good book. The auditor was great.

what a great short audiobook from the pen of Julie C Gilbert and narrated by Reuben Corbett. I thoroughly enjoyed it xxxxxxx

This was good.I think it was geared more towards YA or younger.It left some questions unanswered. Reuben Corbett was a fine narrator.I was given this free review copy audiobook at my request and have voluntarily left this review.