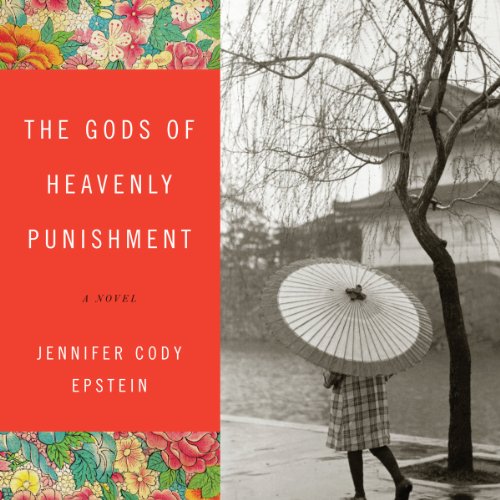 The Gods of Heavenly Punishment

By: Jennifer Cody Epstein
Narrated by: Robert Sams
Try for $0.00

A lush, exquisitely rendered meditation on war, The Gods of Heavenly Punishment tells the story of several families, American and Japanese, their loves and infidelities, their dreams and losses, and how they are all connected by one of the most devastating acts of war in human history.

In this evocative and thrilling epic novel, fifteen-year-old Yoshi Kobayashi, child of Japan’s New Empire, daughter of an ardent expansionist and a mother with a haunting past, is on her way home on a March night when American bombers shower her city with napalm - an attack that leaves one hundred thousand dead within hours and half the city in ashen ruins. In the days that follow, Yoshi’s old life will blur beyond recognition, leading her to a new world marked by destruction and shaped by those considered the enemy: Cam, a downed bomber pilot taken prisoner by the Imperial Japanese Army; Anton, a gifted architect who helped modernize Tokyo’s prewar skyline but is now charged with destroying it; and Billy, an Occupation soldier who arrives in the blackened city with a dark secret of his own. Directly or indirectly, each will shape Yoshi’s journey as she seeks safety, love, and redemption.

What listeners say about The Gods of Heavenly Punishment

Would you try another book from Jennifer Cody Epstein and/or Robert Sams?

Would you be willing to try another one of Robert Sams’s performances?

No, I presume he was chosen because of being able to pronaunce the Japanese words (well for a non japanese , he sounded like he could ) His narration was stilted . choppy and seemed poorly prepaired for what he was about to read. he kept stopping midsentance . for me it really ruined the whole experience . I was shocked to learn at the end of the book that it was Audible that had produced it, I would have expected a much better performance from a company that should understand the narration can make or break a good book.

a bit of all feelings .

liked the story , as stated above , it was completely ruined by bad narration , I'm thinking of returning this one , something I very rarely do.

After listening to 85% of the book, it throws you a curveball. I had hoped it would be similar to "Hotel on the Corner of Bitter and Sweet". Disappointingly different, however.

A good story with different perspectives on the second world war.

Awful japanese pronounciation destroyed my enjoyment of the performance.