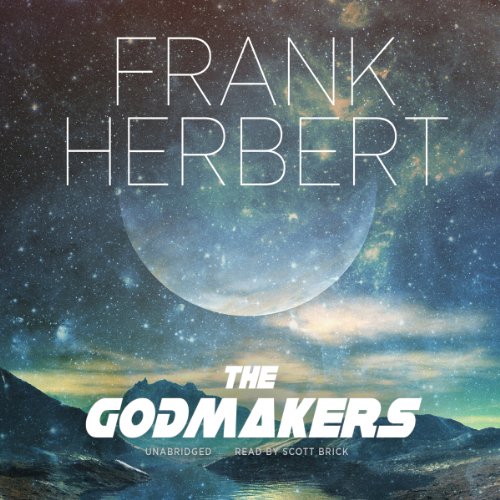 By: Frank Herbert
Narrated by: Scott Brick
Try for $0.00

On the edge of a war-weary and devastated galaxy, charismatic Lewis Orne has landed on Hamal. His assignment: To detect any signs of latent aggression in this planet's population. To his astonishment, he finds that his own latent extrasensory powers have suddenly blossomed, and he is invited to join the company of "gods" on this planet - and the people here place certain expectations on their gods.

The Godmakers is an expansion of four short stories written from 1958 - 1960. It is an exploration of the concepts of war and peace, government and religion.

What listeners say about The Godmakers

I recently listened to The Godmakers written by Frank Herbert and narrated by Scott Brick.

This book presupposes a future where religion has been developed not merely as a belief, but as a science. As part of the course of its development they use massed belief to intentionally create a God. While they are fairly certain one of the human race will become a God, they have no way to predict who it will be or what will occur after that. They don't even know if the God they created will survive once the individual realizes they are, in fact, a God.

Their story is intertwined with the unsuspecting soul of Lewis Orne. He's part of R&R, the Rediscovery and Reeducation Service. He is sent to distant planets seeking out forgotten fragments of humanity and making sure they are not harboring any hostile intent towards the rest of the human race, before releasing modern industrial secrets to them.

Scott Brick does a very good job with narration of this book and gives real emotional depth to all of the characters he reads. He is quite a gifted reader and brings his skill to bear here.

Conclusion: As I understand it this book was originally a number of separate short stories that have been compiled into this single novel. I would never have guessed such, had the information not been readily available, as it's extremely cohesive and well put together. As a story it's quite an interesting bit of science fiction, however, it does require the reader presuppose that religion can be turned into scientific study and that massed belief does have power that can affect our universe in a tangible way.

If you don't want a scifi book that admits the possibility of God's and miracles, this will not be for you. If, however, you believe the idea of creating a God sounds like an interesting tale, it's likely your faith will be rewarded.

this was spectacularly written and performed. it's hard to describe this work as science fiction or fantasy, rather it is an exploration of metaphysics against an imagined background of characters and plot. instead of calling it an allegorical fiction, I'll call it what it is: a parable of the nature of man, existence. and creation

Scott Brick could read me the dictionary.

Herbert wraps this one up with some pretty open ended questions. I was hoping to get more into his interpretation of the day-to-day of a god, but the ride there was fun all the same.

Readers hoping for something approaching the richness and excellence of Frank Herbert's Dune masterpiece will find The Godmakers disappointing. The Godmakers consists of four closely connected short stories concerning Lewis Orne, an agent of the Investigative Adjustment (AI) organization. Similar to the Bene Gesserit in the Dune Universe, the AI employs made-up religious doctrine and applied sociology to neutralize threats posed by potentially warlike planetary societies. Also like the Bene Gesserit, AI agents possess extrasensory psychic powers and prescience which they employ to manipulate individuals and societies to their ends. Unfortunately, the stories in this book are not that interesting. The characters are one dimensional and spend entirely too much of their time pontificating at each other. One cannot fault the generally excellent narrator Scott Brick, who does the best he can with what he has to work with, for the failure of this book to engage the reader.

This reader is one of the worst. I have heard many of his books, and they all put me to sleep with his sing-song reading that has zero bearing to the action. The character might be yelling, crying, singing, whispering -- the narration stays the same regardless. No idea how anyone can call this a good performance. :(

Could you see The Godmakers being made into a movie or a TV series? Who should the stars be?

The opening was boring. The middle was OK, but pretty thin on character development. Then the end went on and on and on, with a nonsense finish.In a phrase... short book, but too long for what it had to say...

Scott Brick is a gem

First three stories were excellent, the last one was a bit esoteric. not a book I recommend multitasking with, as I frequently had to rewind. Scott Brick excellent per usual.

This book is a complete waste of time. About 25% of it was entertaining and the rest was philosophical horse crap.
There's no way this book would have ever even been published if he had not already had such a huge hit with the book Dune which was an absolute masterpiece!
Do not waste your time or money.

The story is good, at first then it just digresses into a bunch of boring babble.

In my opinion, some books translate to audiobook better than others. This story is told in sections that I think are a little easier to process when reading the physical book. There are no discernible “part one: x part two: y part three: z” breaks in the telling so it is easy to become lost. While listening it can become disorienting at first during new sections. I found myself starting several sections over as I became incredibly confused trying to associate the events/conversations taking place with what I had just heard.

I enjoy this narrator. I would assume the reviewer(s) that say he has a monotonous cadence with no inflection or emotion have incredibly high standards. Likely these people are looking for something highly produced with sound effects/different narrators etc. Though some “amazon originals” are like this, I would not categorize them as audiobooks.

I would like someone to catalog for me how many times Frank Herbert has had the words “tried to swallow in a dry throat” published.

WHEN THINGS DON'T FIT, THERE ARE MISSING PIECES
I like Dune and The Heaven Makers. I was hoping since this was a shorter work, that it might be similar to The Heaven Makers, but it was not. NOTHING IS TRULY SIMPLE. Even though lots of big words are used, lots of descriptive language, the story and the characters are not engaging. It seemed at first that this was going to be Herbert's Hari Seldon, than we got this Psi stuff. This was not for me.

THE GALAXY MEDAL
Brick did a fine job.

So we’ll written, narration is good - doesn’t detract. Herbert’s dialogue about religion is important. This gem is a classic. I read it more than 30 years ago. But listening now, it is fresh, pertinent, incisive and still incredible. Not to be missed.

One of the best books ever.

Superb book, written by one of the best SYFY authors of all time. it is the only book I read every year.

The narrator sounded like he had taken sleeping tablets

I read this book back in the seventies, at the time I thought it was really good. I don't know if it was the narration or that it has dated badly but I found it dreary. It is slightly misogynistic with some of the feel of his later Dune novels but none of the wonder. nothing much happens.