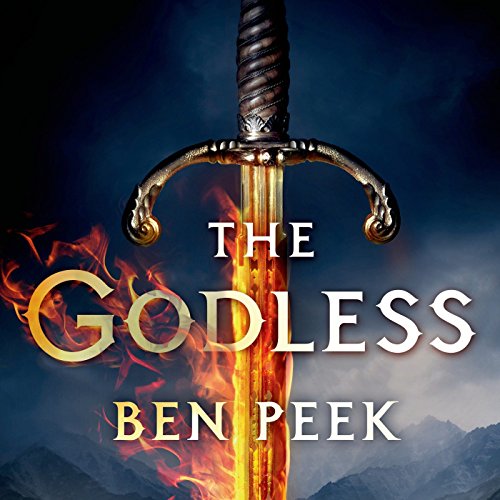 By: Ben Peek
Narrated by: Chris Sorensen
Try for $0.00

The Gods are dying. Fifteen thousand years after the end of their war, their bodies can still be found across the world. They kneel in forests, lie beneath mountains, and rest at the bottom of the world's ocean. For thousands of years, men and women have awoken with strange powers that are derived from their bodies. The city Mireea is built against a huge stone wall that stretches across a vast mountain range, following the massive fallen body of the god, Ger. Ayae, a young cartographer's apprentice, is attacked and discovers she cannot be harmed by fire. Her new power makes her a target for an army that is marching on Mireea. With the help of Zaifyr, a strange man adorned with charms, she is taught the awful history of "cursed" men and women, coming to grips with her new powers and the enemies they make. Meanwhile, the saboteur Bueralan infiltrates the army that is approaching her home to learn its terrible secret. Split between the three points of view, the narrative of Godless reaches its conclusion during an epic siege, where Ayae, Zaifyr, and Bueralan are forced not just into conflict with those invading, but with those inside the city who wish to do them harm.

What listeners say about The Godless

This review is written without finishing the book. The writing for the story itself is ok, but it gets confusing from time to time because one minute your talking about a scene of something that's happening now and the next second your a decade to a few thousand years in the past depending on the characters point of view and just and abruptly the viewpoint switches back to the present again.
The biggest problem with this audio book is the narration. Some narrators perform with passion and others make separate voices for the different characters and this narator does neither. Everyone sounds like they are all speaking with an arrogant insincere tone of voice that some times sounds arrogant but almost always very even and never varying much. Once in the book the narrator forgets himself for a minute and the characters voice changes and actually sounds angry. So far 3/4 of the way through and that has only happened once. The strait level reading would be OK, but the nasal tone of voice were they always sound like they are getting away with something with EVERY SINGLE WORD gets grating after the first hour.