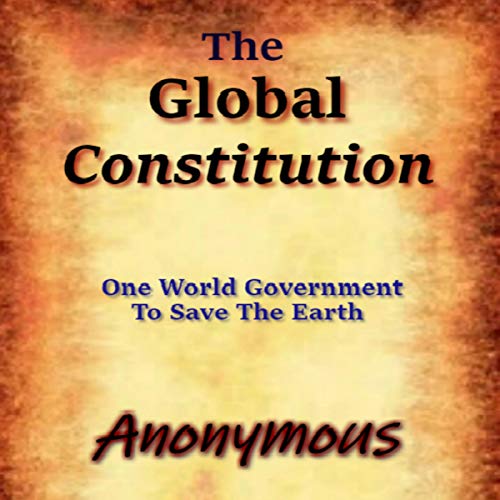 The Global Constitution: One World Government to Save the Earth

The Global Constitution: One World Government to Save the Earth by Anonymous

Over the past several years and in the years to come, we will see more and more direct evidence that our political systems are fatally flawed. There are no controls for holding out for common sense solutions before installing only the most expensive and the least effective solutions to our problems. They bring out the worst of our kind and put the rascals into positions of authority over us all and the biggest problem is that there is no way to correct for their maligned behaviors. We are always forced to sit and watch from the sidelines as our country and our planet is degraded and slowly destroyed. The major problem is that the dictators in the world believe that their brains are the only ones capable and wise enough to solve the world's problems, when it is these singularly untrained minds which are the problem. They look at their citizens, the average men and women whom they never understand as if we are ants. We are their cannon fodder. We are like sheep who need to be husbanded, fed and warehoused until such time as it's perceived by them that it's time for our slaughter.

Over the centuries their mass slaughter of us has been limited to a few cities and towns. Then, in the last century the mass slaughter expanded into hundreds of cities and dozens of nations being destroyed. The next major war will be brought into every living room on the planet. The next few decades even assuming we are able to skip another major world war, will mean that we will all die from suffocation as all of the oxygen is sucked out of our atmosphere and gradually replaced by a huge black sooty cloud of Carbon Dioxide and Carbon Monoxide, which will spell disaster to all life forms on this Earth. The silence will be deafening and last for millions of years. This is the world's first attempt to unify all the people of the Earth under one set of laws and rules that could prevent total disaster.

What listeners say about The Global Constitution: One World Government to Save the Earth

Fantastic read for anyone with an open mind.

This was a comprehensive overview and helpful description of the real life situation in which a one world government is operating. It appropriately covers different concessions against the idea and provides enough examples to what it would look like. The author seemed to do their research and are very open to changing the system which I appreciate.