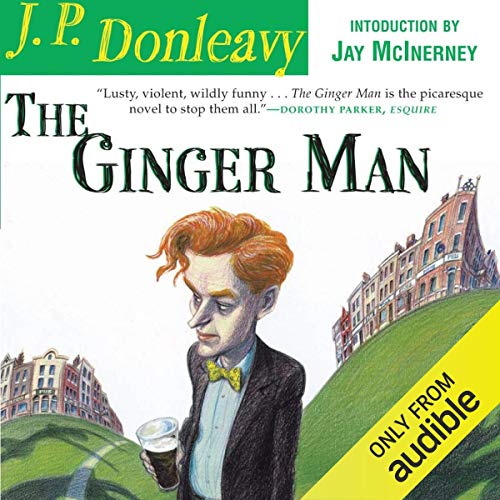 First published in Paris in 1955 and originally banned in America, J. P. Donleavy's first novel is now recognized the world over as a masterpiece and a modern classic of the highest order. Set in Ireland just after World War II, The Ginger Man is J. P. Donleavy's wildly funny, picaresque classic novel of the misadventures of Sebastian Dangerfield, a young American ne'er-do-well studying at Trinity College in Dublin. Dangerfield's appetite for women, liquor, and general roguishness is insatiable - and he satisfies it with endless charm.

"Lusty, violent, wildly funny... The Ginger Man is the picaresque novel to stop them all." (Dorothy Parker, Esquire)

What listeners say about The Ginger Man

The lyrical quality of money is strange

It is like J.P. Donleavy lifted Harold Skimpole out of Hard Times and made a whole whore of a novel of him as a young law student in Dublin. There are novels about drinking and there are novels about being shitfaced. This is a shitfaced novel. It ranks right up there with Lowry's Under the Volcano. Except insead of meszcal, there is plenty of stout and Irish whiskey. The prose is distilled three times: once with food, once with f#cKing, and once with irreverant flippancy (maybe once too for finances, but that would ruin my trinity of distilation image).

But the prose? Dear God, Mary and the baby Modern Library, J.P. Donleavy can write crazy post-Joyce juice. He was rock and roll before rock and roll. His sentences hit you like Mick Jagger dancing on John Bonham third drum stick. It doesn't seem like a long novel, but requires slow, devoted reading. You have to put it down and sober up every few pages. More than 80 pages in one sitting will leave you shitfaced with veins breaking and uncontrolled shaking of the hands.

Go easy my friends, and enjoy drowning in the softness.

This book is extraordinarily not politically correct. It was written in 1955 and immediately banned. It has a lot of rough sexually explicit language and thoroughly disreputable characters, The prose alternate between the base and the sublime with some aspects of Joyce. On the surface this is a long humorous story of a Ginger Man who is violent, drunken, manipulative, irresponsible, and thieving. Yet every now and then there is a powerful aside showing the Man's disorientation in a world without faith and with morals without foundations. Then the story become sad and even frightening, but for only a moment, as dwelling on such things is intolerable.

A NY Times review said, "comments dramatically on the absurdities of an age clinging to values in which it simply cannot believe and unable to summon up the courage to find out what its moral convictions really are."

Although the narration was not bad, and was clear and understandable, I did not care for many of the choices of characterization. The snooty Dangerfield voice seemed distractingly wrong to me each time it was used.. Several other voices were also sub-optimal.

This is a very good book but is not for everyone.

Has not age well

I loved this book in college. It was well written and the main characters (well, the men anyway) were so anarchistic. Drinking, brawling, womanizing...at the time it seemed so compelling. Now, 40 years later, I gave it another try. It did not age well. For one thing, the main character is abusive and exploits the women in his life and you can't help but wonder what they ever saw in him. I could go on, but times change and misogyny just isn't amusing anymore.

An instant favorite for me. I'm not sure how this book eluded me for so long but it will be a companion for life. The reading by Moy is nothing short of a performance. Wonderful accents, inflection and pace.

A story of a 24K scoundrel who has few redeeming qualities. As for the performance-a wealth of accents to handle, most done well with the exception of Sebastian, who hails from St. Louis where no one speaks with that accent. His accent, as well, is inconsistent, even taking into account Sebastian’s pretentious use of an English accent. Does Donleavy actually use “me”for “my” in the text? No American says that...and Donleavy would know that...as well as the performer.

I found this a delight to hear, and so funny to hear about his shenanigans!

The reading of this book is so poor I barely made it through one chapter. I wish I could get money or credit back for this. Truly horrible reading.

Gets better and better

At first I wasn't sure I'd like this book but by the end I was howling with Sebastian. Incredible performance by Patrick Mou too, I highly recommend.

The Ginger Man - Ok, but

I picked this novel since it is on the list of the top novels. I see the wit and I can see why at the time it was banned in some places. It was interesting performance but it become slow with his endless scheming. I was amused in some places and not in others. It is worth a read to see the character in a certain time and place. However, I will not re-read.