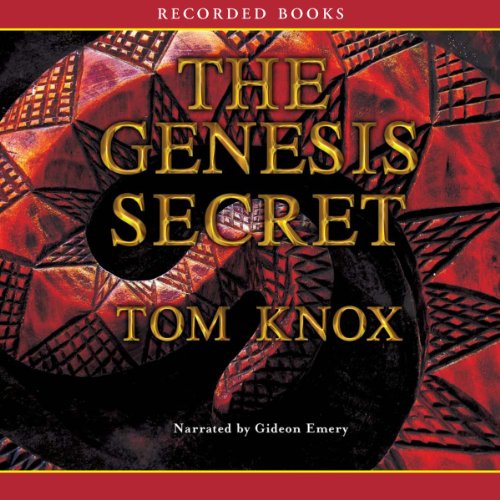 In this epic thriller by popular British journalist and author Tom Knox, a secret lurks beneath blazing sands - triggering ritualistic slaughter and threatening the founÂ­dations of modern thought.

When an archaeological dig in Kurdistan unearths a structure far older than Stonehenge or the Great Pyramids, British reporter Rob Lutrell rushes to the scene. But this intriguing assignment takes a turn for the worse when sabotage and murder cast a frightening shadow over the site.

That's what this should be called: Genetics Secret, not Genesis Secret. First of all, its scope is just too ambitious for a first work of fiction. It always amazes me when a person or character who purports to be agnostic/atheist (as does the main character Rob Luttrell) ends up spouting an alternate explanation to religions that have been honed over centuries. And in this case it tries to offer an alternate explanation for history, with the "north men" being the genetic bogies. As an alternative to other tried (whether true or not) explanations, it doesn't stand up very well, in my opinion. It got as "preachy" as an areligious explanation can get toward the end and is more akin to science fiction in its "genetic explanations" for history and life on all continents. Eyeroll is all I can say in response. Yes, I listened alllllllll the way through the gruesome tortures that end up being attributed to the genetics of the usual social suspects. The only reason I kept listening was the melodic voice of the narrator. Hopefully, I can find some better material narrated by him ... this one I definitely canNOT recommend.

Apart from being almost sickeningly violent in some parts, the story (which is actually two story-lines merging at the end) comes over as a rather well researched archeological thriller. The research and history part of this novel are excellent...especially for a history buff like me. The story on the other hand, might be a bit much for some. It has vivid accounts of horrific violence, and the story is a bit far fetched in some places. But if you can stand the violence, and are intrigued by religious history...or even history in general, this might be a book for you...

Would you listen to The Genesis Secret again? Why?

Only if it were coming out as a film

What was one of the most memorable moments of The Genesis Secret?

The unusual events that lead to the reporter chasing the story to understand what was going on.

The events when the phenomenon began.

When I saw it in catalog I noticed that it was the first book for this writer. I always like to read first works and follow through and watch how he develops in every new book. Mr. "Knox" started with a book at a higher level than other writers are now with several books in print, where research was extensive , highly entertaining and engrossing. I think that he may have a hard time trying to follow with another as good as this one. Great characters, prose and able to not get you confused or lost with all the characters, places and cultures. Great work. Thank you

Keeps you guessing to the end

Story remarkably ties historical occurrences together in a way previously unseen. Obscure connections are made obvious. Thoroughly enjoyed the book although there are descriptions of murder that are decidedly unsettling and disturbing. One note... there is an unfortunate period of silence, at least in my copy, between 1:07:26 and 1:06:47 before the end.

Well narrated, but contains a torture scene so brutal and unnecessary that I was unable to finish. Avoid. If 0 stars were possible, that's what it would be.

Felt this book had lots of potential but failed to live up to expectations miserably.

From interesting story to very gory

The first half of the novel builds an interesting archaeological mystery but then detours to a bloody mess in every detail, not for the squimish!
It did get me to research Gobeckly-Tepe & Catal Huyuk.