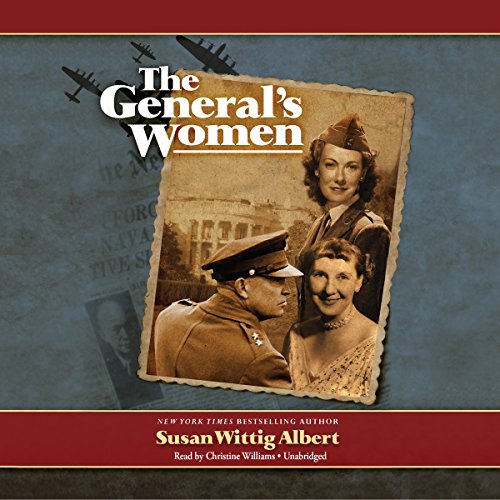 By: Susan Wittig Albert
Narrated by: Christine Williams
Try for $0.00

Set during the chaotic years of World War II, The General's Women tells the story of the conflicted relationship between General Dwight Eisenhower and Kay Summersby, his Irish driver/aide, and the impact of that relationship on Mamie Eisenhower and her life in Washington during the war. Told from three alternating points of view (Kay's, Ike's, and Mamie's), the novel charts the deepening of the relationship as Ike and Kay move from England to North Africa to England, France, and Germany before and after the Normandy landing. At the end of the war, Ike is faced with the heart-wrenching choice between marrying Kay and a political future.

The story continues into the post-war years, as Ike (returning to Mamie) becomes Army chief of staff, president of Columbia University, supreme commander of NATO, and president of the United States. Kay, meanwhile, struggles to create a life and work of her own, writing two memoirs: the first (Eisenhower Was My Boss, 1948) about her war work with Ike; the second (Past Forgetting, 1976) about their love affair. An author's note deals with the complicated question of the truth of Kay's story as it appeared in the posthumously published Past Forgetting.

What listeners say about The General’s Women

Beautifully depicts the human struggle of maintaining one's integrity while still reaching for the desires of the heart.

Nothing about the book itself (two thumbs up). See below about the performance (thumbs down). I read this book, and loved it. Because it would bear re-reading, I got the Audible edition for my second run-through. Unfortunate choice, as it turns out.

Ike. He was maddening, driven, brilliant, hot-tempered but quick to apologize, a stickler for military protocol but warm-hearted with midwestern American egalitarian instincts. He was a middle-aged Army officer handed an unimaginable job (Supreme Commander of the Allied Expeditionary Force) and brilliant enough to perform it. But I think he muddled his handling of his relationship with Kay Summersby, and the very muddling convinces me he was deeply in love with her. In the later months of the war, he even risked his career as he tried to find a way to go forward with her after the war was over. There's enough historical smoke to support this fictional treatment of the possible fire that was behind it.

This is no criticism of the narrator. She did a great job.But I found this audiobook so irritating that I couldn't finish it. The problem is that someone in charge of producing the audiobook was lazy. They must have skimmed the text, seen references to Kay Summersby as Irish, and decided she spoke in a pronounced Irish brogue. The problem is, Kay Summersby was a real person, Anglo-Irish, daughter of a British Army Officer, who passed up being a debutante in London in favor of traveling through Europe. She lived in London from her teenaged years on, was definitely upper-class, and would never have spoken with that Irish accent. Kay was interviewed later in life on video, and there are clips of her speaking on two episodes of the seminal TV series The World at War (from the 1970's). By then her speech was somewhat Americanized, but it's still an English accent, not that Irish brogue. In this audiobook Kay sounds like a naive Irish schoolgirl. She was nothing of the sort. When she met Ike, she was 33 years old, a former House of Worth model, an outgoing, very social upper-class Brit. She'd been married briefly and was in the process of a divorce. She was beautiful, gracious, and discreet. Honestly, I gritted my teeth at the umpteenth iteration in this performance of "Yes, sir!" in that ridiculous breathless Irish brogue.

Did The General’s Women inspire you to do anything?

To learn more about both Kay and Ike - as the new stack of books on my table attests.

One of the great mysteries of the Eisenhower myth was the true extent of his relationship with Kay Summersby. Ms. Albert does a wonderful job of mixing history and fiction-From what I have read about Summersby and Eisenhower her story really hits the mark. While we will know whether Ike and Kay were lovers, the story and the appended biography all but makes the affair certain. For me Kay was an incredibly sympathetic figure that unfortunately did not know or believe that Eisenhower after the world belonged to the country and not to her. I enjoyed reading this book alongside my reading of Ike by Michael Korda.

The author did a great job telling this story. I really like the fact that she tells what parts are true. and where she took liberties. I do not like stories of infidelity, but I am a sucker for True Love. War is difficult enough and I believe Ike and Kate had true love for a while plus a friendship that could never be broken. The narrator also did a fantastic job. Definitely a good read.

Takes too many liberties

Takes too many liberties

It is more like a soap opera than a biography

I loved this war time story. The narration was great. I was looking forward to the next opportunity I had to continue listening. I highly recommend it.

I never knew about the affair. Great story and details. I knew some parts had to be fiction, however, it really made the book more interesting.

a way story for women: a romantic war story

narrator was perfect. story was enthralling. author's notes at the end were helpful and appreciated.

I enjoyed this book and recommend it! Learned about WW2 and some of the rules for operating !

I thoroughly enjoyed this story - the author has captured the times so well. I particularly enjoyed the authors historic notes at the end. It is so frustrating that we will never know the true story.