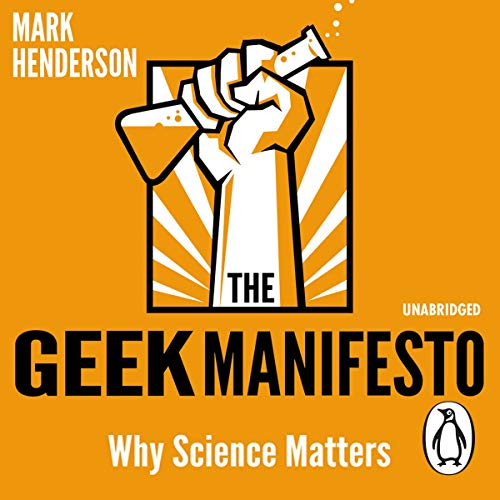 We live in a country where:

Whether we want to improve education or cut crime, to enhance public health or to generate clean energy, science and its experimental method is critical. The Geek Manifesto shows us what needs to happen to entrench scientific thinking more deeply into politics and society, and how to turn our frustrated outrage into positive action that our country's leaders cannot ignore.

Great topic, shame about the Geekiness

Science certainly does matter, and this book presents a great set of examples of why it does. However, it is sad how geekiness gets in the way. Ok for the title, but the constant reference to geek for anybody with a serious respect for the scientific method starts to grate after the first chapter. That geeky weakness for lists and slightly flowery prose ('in and of itself') meant that for large sections (between the engaging anecdotes) I was listening out of a sense of duty rather than enthusiasm. And the narrator: I can only imagine that Tom Lawrence is a gifted actor who was asked to sound like the most tedious Geek he could imagine. Awful!

An essential read if you care about science

This should be required reading for anyone who cares about science, evidence, education or economics. For too long we've let prejudice, politics, and "we've always done it this way" drive the world. It's time to reshape the world for the better with evidence and the scientific method.

Geeks of the world unite!

While the book is interesting and amusing.... it really should have been better researched. As a hard working geek I have to say, 'that man does not represent me!'