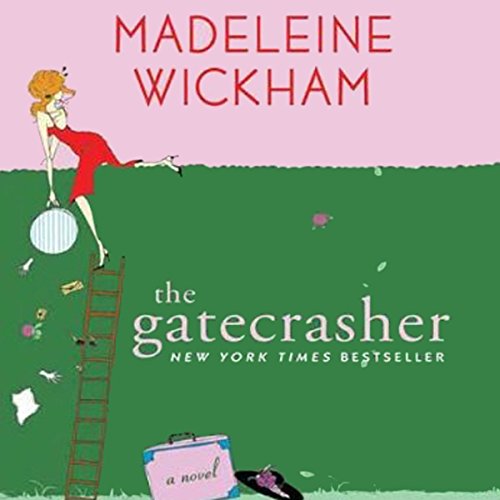 By: Madeleine Wickham
Narrated by: Katherine Kellgren
Try for $0.00

The secret is out! Madeleine Wickham is Sophie Kinsella, and The Gatecrasher is just as delicious as her internationally best-selling Shopaholic series. Madeleine Wickham's bitingly funny and edgy style keeps fans coming back for more. So hold onto your haute couture hats, as you dive into the fantastic world of Wickham!

Everything's coming up roses for Fleur Daxeny, as she goes through more rich men than she does designer hats....if that's humanly possible. Beautiful, charming, and utterly irresistible, her success at crashing funerals to find wealthy men is remarkable. But behind Fleur's Harvey Nichols wardrobe, is a woman with a mysterious past. Fleur wastes no time in seducing her latest conquest, the handsome and rich widower Richard Favour, and she swoops into his life like a designer-clad tornado. His children are caught up in a whirlwind as their father's new girlfriend descends on the family estate leaving chaos and excitement in her perfume-scented wake. Soon, more than one family member is suspicious of Fleur's true intentions. Fleur is not one to wear her heart on her Chanel sleeves, but she soon finds herself embracing Richard and his lovable family.

But just as Fleur contemplates jumping off the gold-digger train for good and enjoying the ride of true love, a long-buried secret from her past threatens to destroy her new family. Fleur is thrown into a race against time to prove herself to Richard before it's too late.

Can she trust her heart or will she cut ties and run away as fast as her Prada pumps can take her? Take a wild and marvelous ride with The Gatecrasher, whose clever, chic, and sassy style will leave you desperately wanting more wonderful Wickham!

What listeners say about The Gatecrasher

The cover is deceiving

Don't go by the cover on this one. It's much more serious than lead to believe. The ending is unexpected but in a good way.

I loved the concept of this book and was intrigued right from the gate. As the story developed, I was really looking forward to seeing how they handled so many of the characters plot lines and development…but the ending was a massive disappointment.

There were a bunch of loose ends that they didn’t tie up and they really let the main character off the hook. In retrospect, they never really fully developed the main character - she was very flat. I kept waiting for depth but it never came.

Bummer, this story had a ton of potential.

After reading several of the reviews I was hesitant to purchase. Glad that I decided to form my own opinion...slow at times and a bit more real than some of her previous books, but I enjoyed the book. I was pleased with the ending. :-)

I didn't like any of the characters in this sad book about a woman who has no values aside from taking money from men who are grieving. Fleur doesn't care who she hurts in her efforts to get rich. She's a user and takes her neglected daughter on this horrible ride. I couldn't finish the book as I continued to dread what would happen to each of the unfortunate characters.

What could Madeleine Wickham have done to make this a more enjoyable book for you?

If there had been a central character I could have felt connected to or even liked it would have made this book better.

She's fine. No problems with the performance.

It's well written. I usually love Sophie Kinsella's books. This was depressing and made me sad and anxious for all the characters.

The performance by Katherine Kellgren was great, although I'm not a fan of her American accent. Maybe it was more the character - a whiney teenager in this case - but I much prefer Ms. Kellgren's other accents and voices. She kept me listening to the bitter end.

The story started off interesting, but the characters fell flat and were ultimately annoying, no one was likable enough to cheer for, one character was horrible enough to dislike but there was no payoff for bad behavior at the end, and the whole story itself just fizzled into nothing. There were elements to each character that could have been developed further to make each character more real. As it was, I felt like I missed a chapter or two somewhere between a lead up to a possible dramatic climax and the end of the book.

What was most disappointing about Madeleine Wickham’s story?

Nothing stood out to be a favorite.

Really disappointing book. It could have been better, but I felt the author was too wrapped up in giving everyone a "happy ending" that no one got a satisfying conclusion. Not even really happy ones, just sort of a fluffy meringue of "I ran out of time; here's the end of the book; live happily ever after."

Entertaining but too long for the storyline

I enjoyed most of the story but it was lengthy to end in such a way as it did. All the build up and fizzle at the end left me feeling I’d just wasted several hours I could have been enjoying another good book. So middle of the road in this one. Enjoyable times, yes, difficult to like main character. And ended abruptly.

Clever, attention- keeping, and totally uplifting. Although I find MW books more edgy than Sophie Kinsella's and the main characters more dastardly...this story brought the best of both mystery and satisfaction.

I was intrigued to see the difference between pen names, and this book certainly provides all the stunning depth of typical kinsella characters even if they do cover more serious territory. The title and cover don't do much to help establish this distinction between voices, but despite the jarring effect of figuring out that this will not be a rom com, it is an interesting read. I do, however, wish that the end were a little longer to show a few of the loose ends being tied up.

only for a listen while driving somewhere, or coloring your hair or other time when you'll only half listen.

Would you be willing to try another book from Madeleine Wickham? Why or why not?

yes, no one is perfect.

the scene's of the lead character's youth in India are pretty good, but short.

Did The Gatecrasher inspire you to do anything?

It made me appreciate my red-gold hair more.

The narration was pretty good but sometimes a little over played. Still, not bad.

A bit of black humor for this author, with an odd plot. Doesn't quite get off the ground, though. Still, if you do like Sophie Kinsella, it's interesting to read an earlier effort. Worth an audible credit.