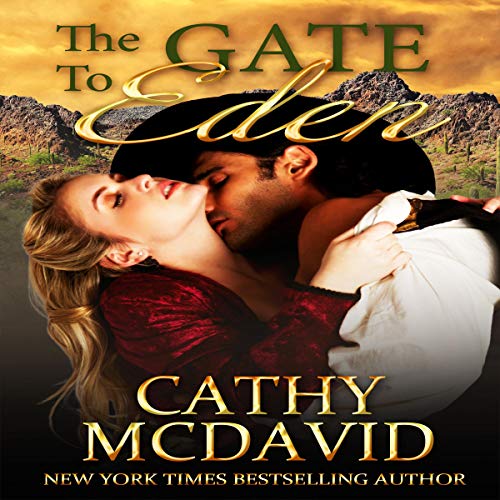 The Gate to Eden

By: Cathy McDavid
Narrated by: Hugh Bradley
Try for $0.00

Expert crackshot Maddie Campbell will do whatever it takes to survive in this female Robin-Hood-of-the-Old-West story - including evading bounty-hunter-for-hire Scott McSween who's intent on bringing her in.

Not your ordinary thief, widow and mother Maddie Campbell likes to think her wealthy victims are merely "donating" to herself and the hundreds of other widows and children left abandoned by the mining company after a devastating accident took the lives of their menfolk. Maddie's secret excursions are quite successful...until ruggedly handsome former lawman Scott McSween arrives in Eden to investigate the recent string of crimes.

Despite her efforts to throw him off track, they can't resist each other. He knows she's somehow involved and is determined to draw out all her secrets in the most exquisite ways - with soft caresses and passionate kisses. But when finally confronted with the truth - that Maddie is actually the thief he's been hired to hunt down and bring in - will Scott choose the woman he loves or his duty to the law?

What listeners say about The Gate to Eden

These are not your same every day advantage bunch of women that we are dealing with here. They are smart, strong, and funny. We have a different kind of love story with so many twists that someone actually falls for somebody eventually. You may even cry. The book hits close to home therefore the feelings are real in every capacity with a happy ending. A very good read!

The first scene had such a surprising twist that it hooked me right away. I wanted to know if they would get away and, if so, how. I felt terrible for the widows and children and wanted justice for them. Scott and Maddie were well developed characters and I thoroughly enjoyed the story.