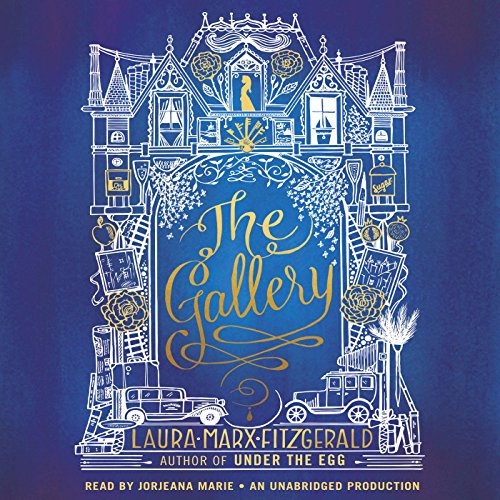 By: Laura Marx Fitzgerald
Narrated by: Jorjeana Marie
Try for $0.00

A riveting historical art mystery for fans of Chasing Vermeer and The Westing Game, set in the Roaring '20s!

It's 1929, and 12-year-old Martha has no choice but to work as a maid in the New York City mansion of the wealthy Sewell family. But, despite the Gatsby-like parties and trimmings of success, she suspects something might be deeply wrong in the household - specifically with Rose Sewell, the formerly vivacious lady of the house who now refuses to leave her room. The other servants say Rose is crazy, but scrappy, strong-willed Martha thinks there's more to the story - and that the paintings in the Sewells' gallery contain a hidden message detailing the truth. But in a house filled with secrets, nothing is quite what it seems, and no one is who they say. Can Martha follow the clues, decipher the code, and solve the mystery of what's really going on with Rose Sewell?

Inspired by true events described in a fascinating author's note, The Gallery is a 1920s caper told with humor and spunk that listeners today will love.

"This lively and inventive mystery successfully incorporates history, art, and literary classics...readers will certainly be swept up by Martha’s pluck and the mystery’s many layers." (Booklist, starred review)

"Offer this to fans of Blue Balliett who like sophisticated adventures." (Publishers Weekly)

What listeners say about The Gallery

Good story but Not for kids

I saw this book in the children section, but I don't think it is appropriate for children. it is a book reminiscent of Kate Morton's style. we are told and ending at the begining and then slowing discover how the ending came to be (or not?).