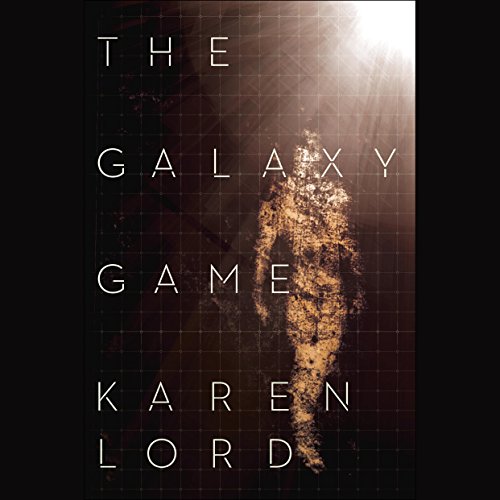 Karen Lord is one of today's most brilliant young talents. Her science fiction, like that of predecessors Ursula K. Le Guin and China Miéville, combines star-spanning plots, deeply felt characters, and incisive social commentary. With The Galaxy Game, Lord presents a gripping adventure that showcases her dazzling imagination as never before.

On the verge of adulthood, Rafi attends the Lyceum, a school for the psionically gifted. Rafi possesses mental abilities that might benefit people... or control them. Some wish to help Rafi wield his powers responsibly; others see him as a threat to be contained. Rafi's only freedom at the Lyceum is Wallrunning: a game of speed and agility played on vast vertical surfaces riddled with variable gravity fields.

Serendipity and Ntenman are also students at the Lyceum, but unlike Rafi, they come from communities where such abilities are valued. Serendipity finds the Lyceum as much a prison as a school, and she yearns for a meaningful life beyond its gates. Ntenman, with his quick tongue, quicker mind, and a willingness to bend if not break the rules, has no problem fitting in. But he too has his reasons for wanting to escape.

Now the three friends are about to experience a moment of violent change as seething tensions between rival star-faring civilizations come to a head. For Serendipity, it will challenge her ideas of community and self. For Ntenman, it will open new opportunities and new dangers. And for Rafi, given a chance to train with some of the best Wallrunners in the galaxy, it will lead to the discovery that there is more to Wallrunning than he ever suspected... and more to himself than he ever dreamed.

"There is a weight and grace to [Lord's] prose that put me in mind of pewter jewelry." ( NPR)
"This novel is a satisfying exercise in being off-balance, a visceral lesson in how to fall forward and catch yourself in an amazing new place." ( The Seattle Times)
"A smart science fictional fable as inventive and involving as it is finally vital." (Tor.com)

What listeners say about The Galaxy Game

Star-spanning science fiction with a trio of coming of age characters, amidst complex geopolitics, mindships, set across multiple planets and cultures. Different and fresh sets of eyes -- and a few familiar ones -- on the continuing saga begun in Lord's The Best of All Possible Worlds. Miles brings even more and even better accent work here, with Rafi and Ntenman being really well characterized in particular. (Ntenman's first person POV was a delight each time he came into focus.) A bit less in terms of details and focus on the "wall running" game than the tin might imply, but enough that I really want to read a short story where all those details make sense in coming out. I want to see this game in action! With historic echoes of games as memory of war tactics. Highly recommended. Also recommended: Re-listen to the prologue when you're done. Sets up plenty of action to be had in further books set in this universe.

incomprehensible as an audiobook.

Impossible to follow as an audio book. the reader does an admirable job, but the writing is terrible.

A great story in a fascinating sf unitverse

Rafi is fourteen years old, on the verge of legal adulthood as a Homesteader on Cygnus B, and a student at the Lyceum, a school for the psionically gifted. Unfortunately, on Cygnus, psionic powers are mostly feared, and the Lyceum is as much about keeping the students from becoming dangerous as it is about teaching them to use their powers well. Rafi, with powers that will enable him to help people or to control them, is not being helped by the school's treatment of him; instead, he's having nightmares and feeling less and less secure.

Fellow students Ntenman and Serendipity are communities that do support psi powers, and are a little more protected, but have their own reasons for wanting to leave.

So Rafi does, using his powers to help him slip out, and heads first to his mother's home, and then to his aunt's. Serendipity and Ntenman soon follow. It's not long before all three are off Cygnus, on another world, faced with new challenges and about to experience violent political change.

Lord has built an interesting galaxy. There aren't any nonhuman intelligences mentioned, but humans have dispersed and diverged a bit--one of those divergences being the differences in how common psionic abilities are in different populations. It's also a galaxy that, in the not too distant past, experienced a galactic war that wiped out life on one planet, forcing the survivors of one of the most psi-capable populations to resettle elsewhere--with strong tensions between those intent on rebuilding what they once had, and those intent on building new lives in the worlds they live on now.

We see Rafi, Ntenman, and Serendipity faced with real challenges to how they view the world. Rafi has to learn to embrace powers he's feared, initially in the context of "just a game," the popular wallrunning game that involves vertical surfaces and widely different gravitational levels on different parts of the wall. Serendipity is challenged in her ideas of community, and Ntenman finds his skills and opportunities leading him in exactly the direction he didn't want to go: helping to advance his father's business. Lord does a great job of showing us all of these characters growing, changing, and struggling with what their world is doing around them. The political situation is also developed with subtlety and nuance, and grounded in the plausibly real motivations of the different individuals and groups involved.

The narrator, Robin Miles, also does a great job with the different voices.

It's a wonderful book, and highly recommended.

I received a free copy of the audiobook from Audible in exchange for an honest review.

In fact, I'd rather read or listen to the encyclopedia.. Not the narrator's fault, necessarily, though she didn't do much to help the narrative along. It did help me fall asleep one sleepless night, so maybe that's its redeeming quality, but maybe that's just me being generous. Thankfully this was included in my subscription and I didn't waste a credit, or I'd be asking for it back.

the beginning didn't pull me in at all, but i continued to listen because i hoped against hope that it would get more interesting. the entire time while listening, i felt that i was missing a major chunk of what was happening. The narrator, while did an admirable job differentiating the characters, most of the time I had a hard time understanding what was being said. I did not finish this audiobook, the politics and droning explanations made it unbearable.

I kept listening thinking it was somehow going to get better. When it was as over, I thought: What? That’s it? While very imaginative, the story lacked substance and cohesiveness. It was disjointed and underdeveloped. There were many glimmers of hope, then a new tangent began barely related to the last. Even in the end there was so much going on it only loosely came together creating a story void of meaning. Maybe as other reviewers have said, this story might be better read. But even then it would likely require info graphics in order to follow all of the bouncing balls.

some parts were hard to follow, I felt like the accents kept changing for the characters so I was constantly trying to figure out who was speaking to whom.

just not worth it

i listen while working daily, this was hard to follow which happens sometimes while working so I tried to get into it laying in bed but there is just too much going on and the stories don't seem to mean much or have purpose.
simply not worth the time.

Maybe that is what the book is about, but after the first couple of hours of conversation about all the societies and planets and political views and awkward simulacrum to real world parallels, I was still completely lost on what was happening.

Overwritten and boring. Do not operate heavy machinery while listening because of dangers of sudden unconsciousness.