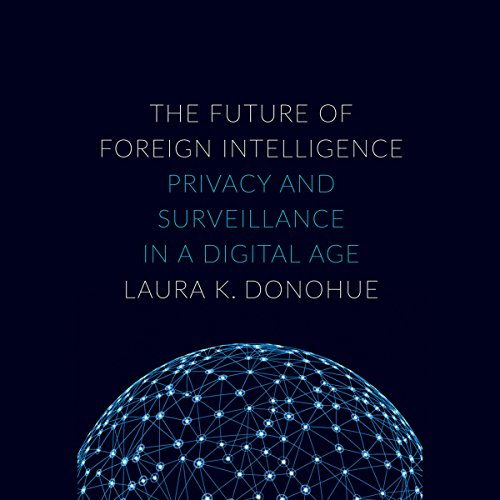 The Future of Foreign Intelligence

By: Laura K. Donohue
Narrated by: Dina Pearlman
Try for $0.00

Since the Revolutionary War, America's military and political leaders have recognized that US national security depends upon the collection of intelligence. Absent information about foreign threats, the thinking went, the country and its citizens stood in great peril. To address this, the courts and Congress have historically given the president broad leeway to obtain foreign intelligence. But in order to find information about an individual in the United States, the executive branch had to demonstrate that the person was an agent of a foreign power. Today, that barrier no longer exists. The intelligence community now collects massive amounts of data, and then looks for potential threats to the United States.

As renowned national security law scholar Laura K. Donohue explains in The Future of Foreign Intelligence, global communications systems and digital technologies have changed our lives in countless ways. But they have also contributed to a worrying transformation. Together with statutory alterations instituted in the wake of 9/11, and secret legal interpretations that have only recently become public, new and emerging technologies have radically expanded the amount and type of information that the government collects about US citizens. Traditionally, for national security, the Courts have allowed weaker Fourth Amendment standards for search and seizure than those that mark criminal law. Information that is being collected for foreign intelligence purposes, though, is now being used for criminal prosecution. The expansion in the government's acquisition of private information, and the convergence between national security and criminal law, threaten individual liberty.

Donohue traces the evolution of US foreign intelligence law and pairs it with the progress of Fourth Amendment jurisprudence. She argues that the bulk collection programs instituted by the National Security Agency amount to a general warrant, the prevention of which was the reason the Founders introduced the Fourth Amendment. The expansion of foreign intelligence surveillance leant momentum by advances in technology, the global war on terror, and the emphasis on securing the homeland now threatens to consume protections essential to privacy, which is a necessary component of a healthy democracy. Donohue offers a road map for reining in the national security state's expansive reach, arguing for a judicial re-evaluation of third party doctrine and statutory reform that will force the executive branch to take privacy seriously, even as Congress provides for the collection of intelligence central to US national security. Alarming and penetrating, this is essential listening for anyone interested in the future of foreign intelligence and privacy in the United States.

What listeners say about The Future of Foreign Intelligence