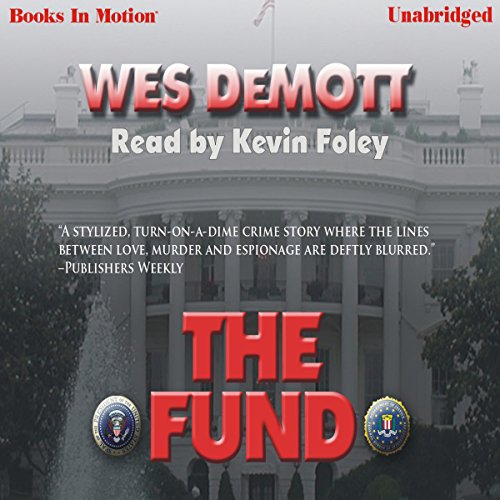 Peter Jamison is an aerospace engineer who wanted nothing more than to save his contract for a tactical weapons system. But together with his girlfriend, attorney Melissa Corley, he uncovered a crime of corruption, power and violence, a crime that has drawn him into a deadly game he cannot win. And now the stakes are going up. The FBI and the White House are determined to silence him, someone has captured Melissa, and Peter knows the time has come to fight back. Any way he can.
©2004 Wes Demott (P)2008 Books In Motion

What listeners say about The Fund

Let me first say that I would have no idea how to write a novel as well as the author did. That said, I found this novel to be a somewhat engaging thriller, but with very two dimensional, unbelievable characters.

The initial premise of the novel is pretty far-fetched. A government contractor who employs a hit man to do away with anyone who is seen to be a threat to the company. However, there doesn't seem to be any suspicion around all of these people who are disappearing until our hero arrives on the set.

Most of the male characters had essentially the same personality, value system, and mode of behavior. For the most part, everyone is Rambo.

The protagonist has outrageous luck. Despite vast odds against him, many mortal wounds, and loss of just about all his blood, he still triumphs and has the energy for making love. Yet for all his resolve to to right the situation, when someone to whom he is close turns out to be the real villain, he just paves the way for that person to continue.

Everyone seems to be having epiphanies, even those you would expect are actually anti-social.

Nevertheless, the plot was involving if you could manage to suspend your sensibilities long enough.

Espionage thrillers with a political slant can tend to sometimes be too formulaic, but there is usually an expectation of likeable, idiosyncratic characters as well as unforeseen plot twists to keep the story engaging. Needless to say, this audiobook offers little of these features. There are simply too many other good selections to choose from. It's not so much that the story is bad, but just not worth the time and effort.