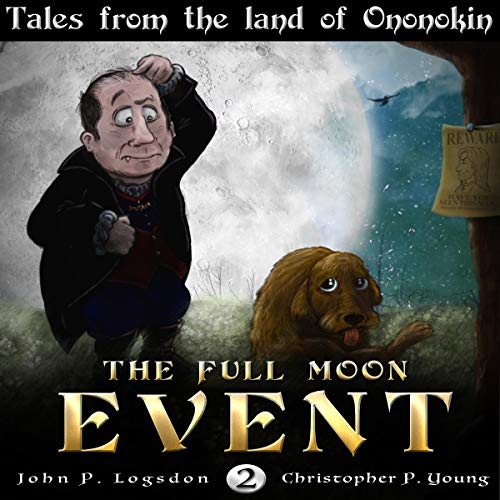 Paulie Vergen is your average, everyday vampire. He's short, overweight, and balding, and he's a bit lacking in the realm of self-confidence. Life was what it was for Paulie until the day that a newly infected werewolf landed on his doorstep. That day launched the one (and only, to this point) adventure that Paulie had ever had ... and it was a doozy. Since new werewolves suffer from amnesia, Paulie dubs the werewolf "Mr. Biscuits" by night and "Burt Biscuits" by day (you know, because werewolves are only werewolves at night and all). Paulie has to help Burt get to Yezan, the land of the werewolves, in order to find help in getting Burt's memories back.

Unfortunately, Stelan Bumache - the notable assassin who works for King Larkin in Yezan - has been hired to kill Burt. Will Paulie and Burt successfully navigate the treacherous path from Viq to Yezan while avoiding attempts by Stelan Bumache to destroy them both?

What listeners say about The Full Moon Event

this story was hysterical! I fully recommend this author to any one who wants a good read and entertainment. 😉

Would you listen to The Full Moon Event again? Why?

Probably. It's a short story and an easy listen. It's very easy to follow and funny.

That the authors are so effortlessly funny. The book starts right away-there is no boring build up of characters, just keeping it simple and yet you feel like you know these characters.

I don't really recall one that really stood out, I just enjoyed it all over.

Not that kind of book BUT I have to say that rape scenes are never funny-not even when it's a bad guy. That kinda threw me off and is the reason for loss of a star.

Worth every penny, fun & enjoyable

Another quality book, the author captures the characters and brings them to life, the narrator in this audio book gets the characters spot on making it an easy and enjoyable listen, can't wait for the next books.

This is a really great book, i love the characters and I can't wait to read the next book in the series. Anyone that likes Terry Pratchett will enjoy this, it has a similar humour, but it is distinctly different with his own flair.