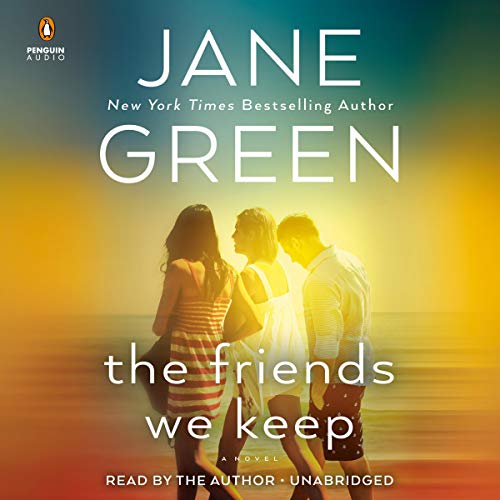 The Friends We Keep

As seen on The Today Show!

The Friends We Keep is the heartwarming and unforgettable New York Times best-selling novel from Jane Green, author of The Sunshine Sisters and The Beach House.

Evvie, Maggie, and Topher have known one another since college. Their friendship was something they swore would last forever. Now years have passed, the friends have drifted apart, and they never found the lives they wanted - the lives they dreamed of when they were young and everything seemed possible.

Evvie starved herself to become a supermodel but derailed her career by sleeping with a married man.

Maggie married Ben, the boy she fell in love with in college, never imagining the heartbreak his drinking would cause.

Topher became a successful actor, but the shame of a childhood secret shut him off from real intimacy.

By their 30th reunion, these old friends have lost touch with one another and with the people they dreamed of becoming. Together again, they have a second chance at happiness...until a dark secret is revealed that changes everything.

The Friends We Keep is about how despite disappointments we’ve had or mistakes we’ve made, it’s never too late to find a place to call home.

"Green writes with a clear, unfettered voice, filling this page-turner with plot twists and hinting at the power of forgiveness." (Publishers Weekly)

“Best-selling author Jane Green is beloved for her dynamic characters and heartwarming plotlines - and her newest delivers!... A rich story of forgiveness and friendship.” (Woman's World)

What listeners say about The Friends We Keep

Story was ok, narration was awful

The story was ok, I didn't really see the intense bond of friendship the 3 friends had, They were 3 people that lived together that knew each other for a long time, but that is all. I felt like the story took a long time trying to establish itself, and it never really achieved that. I could have predicted the big secret about "Evil Ben" from the very beginning, and it was somewhat unbelievable **spoiler** that the two times Ben and Evie were together, she got pregnant both times. I know it can happen, but it seemed like a big stretch trying to establish an exciting plot...that really wasn't that exciting. The worst part about this book was the narration. I couldn't tell if the narrator wasn't British, but was trying to be British, or she was British, and was trying to sound androgynous. Her British male voices were very fake, her British female voices were very gruff sounding w/out any femininity. The attempt at a stereotypical gay male voice was exactly that, stereotypical, and the attempts at the American accents were the absolute WORST. No resemblance to an American dialect at all. I kept confusing who the actual American characters were, because the accent was so horrible.
I stuck with this book mainly because I wanted to see how it ended, but overall, I wouldn't recommend it. One last thing, another reviewer mentioned the cover of the book, and I agree, nothing on the cover resembles any of the characters in the book and none of it takes place on a beach, not sure who did the marketing on that idea, but it was a definite miss.

The story was contrived. The narration was atrocious. She couldn’t do dialogue at all. I never realized someone could voice so many characters horribly.

But worst of all, the depiction of Evvie, the biracial woman in the three-friend group of the title was completely dependent on negative racial stereotypes. I cannot believe that this book was published in 2019.

The story was nice even if predictable. I have over 250 audible books in my library and have never left a review. I just feel that Ms. Green did this book a disservice by not hiring a professional narrator. It was very distracting to listen to different roles, and try to understand who was speaking. She would slow the speech speed now so much that I sometimes had to advance the audio just to relieve myself of the voice. I really like this author! My sincere suggestion is to write as beautifully as you do, and leave performance to the pros.

A good book about true friendship and it's power t

A good book about how true friendships can endure separation and the passage of time and still remain intact.

I wish there was a notation somewhere in Audible and Amazon stating "EXPLICIT DESCRIPTIONS OF SEX" , or content contains rape, incest.... That would be very helpful when buying gifts for your mom. :-)

I enjoyed the story

This story reminds us what is important in life. We all weave our own path and when that path crosses true friendship, it can last a lifetime- through anything.

Story was heartwarming. Brought me back to my college days and the friends i met. Jane did such a great job reading the book and changing her voice,accent, and tone for each character. I couldn’t wait to go for my daily walk to hear what was happening next!

Love the story, however the narration was very dull. I tried to immerse myself in the story itself to keep up with the listening.

I enjoyed this story and the author reading it. I feel in love with her voice.

I really wanted to like this book but not only was the story boring, I absolutely could not tolerate Jane Green's narration any longer. Just awful - the accents, the tone, the articulation. I'm so sorry, I don't want to sound mean. But it was very distracting to me every time I tried to listen. Further, I didn't care for the characters at all so I ended up just quitting the book.