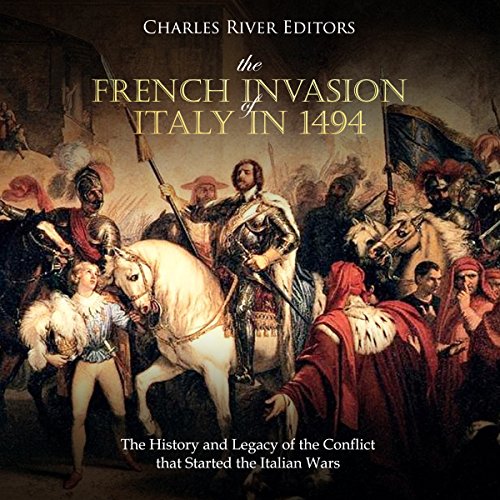 The French Invasion of Italy in 1494

In 1494, there were five sovereign regional powers in Italy: Milan, Venice, Florence, the Papal States, and Naples. In 1536, only one remained: Venice. These decades of conflict precipitated great anxiety among Western thinkers, and Italians responded to the fragmentation, forevermore, of Latin Christendom, the end of self-governance for Italians, and the beginning of the early modern era in a myriad of ways. They were always heavily influenced by the lived experience of warfare between large Christian armies on the peninsula.

The diplomatic and military history of this 30-year period is a complex one that one eminent Renaissance historian, Lauro Martines, has described as "[B]est told by a computer, so many and tangled are the treatises, negotiations, and battles". At the same time, the fighting went in tandem with the Renaissance and was influenced by it. Most historians credit the city-state of Florence as the place that started and developed the Italian Renaissance, a process carried out through the patronage and commission of artists during the late 12th century. If Florence is receiving its due credit, much of it belongs to the Medicis, the family dynasty of Florence that ruled at the height of the Renaissance. The dynasty held such influence that some of its family members even became pope.

Lorenzo de Medici may have not been a king, prince, or duke, but he nevertheless held significant influence over all of the noble houses of the region, from Milan and Naples to the king of France. Between 1482 and 1484, Lorenzo’s influence prevented a close alliance between King Louis IX of France and the city of Venice, which was at war with Ferrara. Lorenzo’s personal influence helped reduce Venice’s power in the region. During the Baron’s War of 1485 and 1486, while Florence sided with the pope, Lorenzo favored Ferdinando of Aragon, who had close ties with Naples, giving Lorenzo the chance to attempt to negotiate an improvement in relations between the pope and Naples. While the two had once been allied against Florence, their alliance had ended with the war. Lorenzo proposed a new agreement between the two, largely centered around financial obligations, in 1489. It was accepted in 1492, creating an enduring peace for some time. Perhaps fittingly, once Lorenzo the Magnificent died, the tenuous peace would go with him, touching off the Italian Wars.

The French Invasion of Italy in 1494: The History and Legacy of the Conflict That Started the Italian Wars chronicles the decisive campaign that forever changed the Italian peninsula at the end of the 15th century. You will learn about the First Italian War like never before.

What listeners say about The French Invasion of Italy in 1494

No background coverage of the great picture behind the facts. Though nice English accent, poor performance, particularly the unbearable bad pronunciation of Italian names and cities.

A High Level Overview of Italy in 1494

An interesting high level overview of the French invasion of Italy in 1494. I recommend this as a good starting point for a study of the Italian Wars.