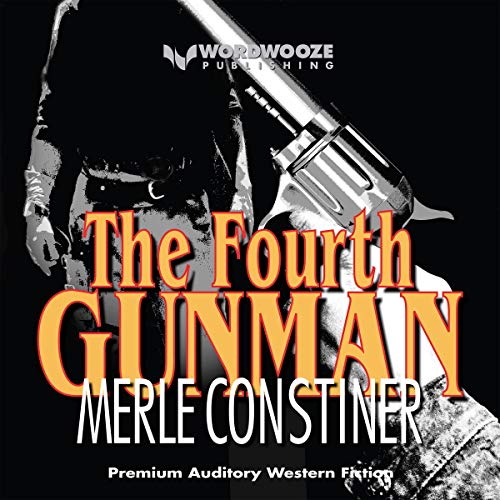 By: Merle Constiner
Narrated by: Michael Dukes
Try for $0.00

Gun trouble in a town targeted for takeover!

George Netfield, proprietor of Kirkville's leading saloon, was a calm, deliberate man - a man who knew what he wanted. And what he wanted most was to root out the rustlers that wanted to make a ghost town out of brawling, prosperous Kirkville.

The forces he opposed were ruthless and clever - so much so that they fooled the very ranch owner they were robbing. Even the owners' daughter Cimarron thought Netfield was in the wrong - and he was desperately in love with her. Every step he took to protect her, drove her further away. Without even the help of the victims, Netfield had to find a way to unmask the marauders and catch them red-handed in their cattle swindle. If he succeeded, he knew Cimarron would hate him forever - and if he failed Netfield knew there'd be wholesale slaughter in Kirkville, and that he'd be the first to get a six-gun send-off.

"Western novels seldom have a saloon keeper as the hero, but Costiner breaks the mold with "The Fourth Gunman." George Netfield began to wonder when the ruthless and clever Elton Colfax, and members of the 7-Diamond begin to take over Kirkville. Colfax, Webster Dunphy and a killer named Kruger plan to take over the town and use it as a way station for stolen cattle. Only Netfield really understands their plans and has the guts and ability to stop them. He gets little help from Colonel Crewe or his daughter. She defends her foreman, Colfax, until slowly but surely Netfield begins to find the links to the gang's plan. Costiner's characters are well developed and even the minor characters are fleshed out. This hero is different." (Arkansas Times)

What listeners say about The Fourth Gunman

A smooth, well-moving western story. It delivers believable characters and environment. It ranks favorably with Louis L’amour and Luke Short, but with its own flavor. Highly recommended.

If you like westerns, this one is full of good shooting and excellent old west fun. Michael Dukes did a great job narrating it and you could be right there next to characters.