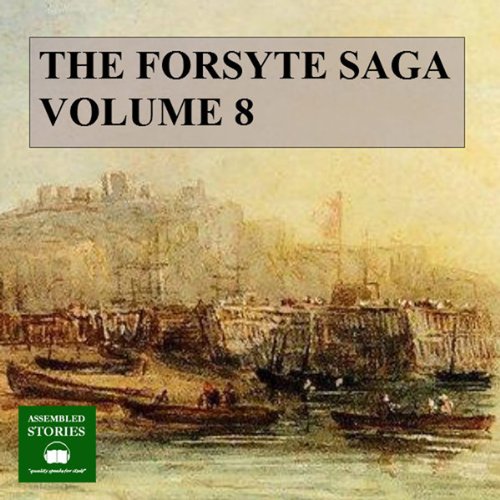 Jon and his mother go to Spain. The son manages to curtail the visit after six weeks.

Meanwhile, Jolyon strengthens his relationship with his eldest daughter, June, who reveals that she sympathises with the young lovers. It is June who helps Fleur in her search for the history of the feud within the family. Prosper Profond, who continues to ingratiate himself with the Forsyte clan, inadvertently discloses the truth.

Although in a state of shock herself, Fleur realises that Jon may not know the whole truth and there could still be a chance to get what she wants. Ignoring the lovesick appeals of a besotted Michael Mont she resolves to marry Jon, with or without the approval of their parents.

"Peter Joyce is the most remarkable one-man band in audiobook publishing. Joyce, an experienced actor, reads them all himself." ( The Independent)
“Family sagas, from Icelandic to Aga, have diverted readers for centuries, but the Forsytes remain the brand leaders. The clever thing about this edition is that it comes in small, easily digestible portions. Peter Joyce, whose rhetorical resonance is perfect for his subject, has divided the saga into nine volumes, each lasting around five hours. Listen for yourselves. It was the dialogue that had me constantly rewinding…. their lives are eminently and endlessly fascinating.” (Sue Arnold, The Guardian)

What listeners say about The Forsyte Saga, Volume 8