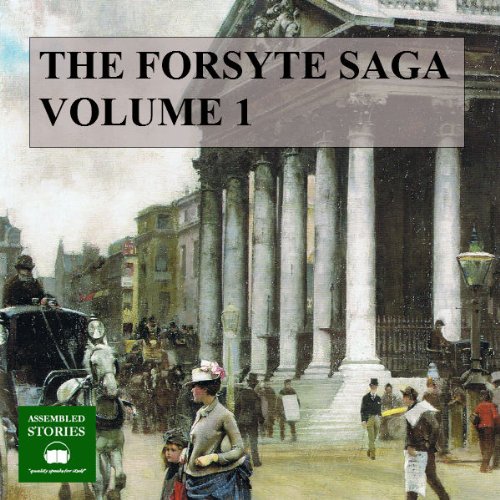 A compelling drama and a merciless scrutiny of a newly monied upper-middle-class family at the turn of the 20th century, The Forsyte Saga has a sumptuous range of characters:Soames, he of the ‘perpetual sniff’; Old Jolyon, ‘typifying the essential individualism born in the Briton’; the sensuous Bosinney with ‘an air as if he did not quite know on which side his bread was buttered’; Young Jolyon, the free thinker; and, of course, the sexually alluring and impenetrable Irene, catalyst for much dissension within the clan.

The Forsytes believe they will live forever, but the unrelenting, imperturbable façade slowly begins to crumble as Aunt Ann, the oldest Forsyte ever, is interred in the family tomb at the end of this first volume.

The author makes his presence and opinion felt with beautifully subtle pinpricks of wit, which leave one in no doubt what he thought of the accumulation of wealth and property, which typified the materialistic Victorian psyche, at the expense of sensitivity and freedom. As in The Dark Flower (also published by Assembled Stories), Galsworthy demonstrates a fundamental understanding of hidden sexual currents and their ability to change our destinies.

If you have enjoyed The Forsyte Saga on television in the past, you will be familiar with this engrossing story; if not, prepare to be completely captivated and engaged by one of the best tales ever told.

About Assembled Stories: Over the years the national press have reviewed Assembled Stories titles as "excellent", "remarkable", "entrancing", "superb", "agic for sure", "masterly", "wonderful", "a class act", and "a splendid example of audio at its best".

"Peter Joyce is the most remarkable one-man band in audiobook publishing. Joyce, an experienced actor, reads them all himself." ( The Independent)
“Family sagas, from Icelandic to Aga, have diverted readers for centuries, but the Forsytes remain the brand leaders. The clever thing about this edition is that it comes in small, easily digestible portions. Peter Joyce, whose rhetorical resonance is perfect for his subject, has divided the saga into nine volumes, each lasting around five hours. Listen for yourselves. It was the dialogue that had me constantly rewinding…. their lives are eminently and endlessly fascinating.” ( Sue Arnold, The Guardian)

What listeners say about The Forsyte Saga, Volume 1

I think watching the TV (2002) miniseries helped me enjoy this so much more, as I already have a sense of the mood. The reading is good.

Wonderful ... So real to life

I watched both PBS shows and they were great. The black and white being the most true to the books. However, the books, wow. So incredible. So amazing. I have now lived life from the 1880s to 1920s. I saw two wars. I lost a King and gained a King. I watched a woman flee from being a piece of property by a man, who really was indeed a good man, only he was brought up to believe that his way was the right way.

The plot is too complicated to deal with here. However, it deals with a large family of wealth and consideration, and how that wealth colors their thinking and behavior. Believe me, it does do that in amazing ways; some for good, some for bad. Yet, you continue to read, you need to read to understand them better.

These series of books, and there are many of them, I think 7 to 9, I have forgotten, but I read them all, are without doubt a MUST if one wants to understand the historical method of living in the past century. Also, it is a riveting read. The narration is positively wonderful. I cried when I was finished. I had lost my friends, indeed, almost my family; just as I did when War and Peace was finished. How dare they stop the book? I demand more. Please ... more.

What disappointed you about The Forsyte Saga, Volume 1?

Readers of the Forsyte Saga know that it is a multivolume work: 3 complete novels and 2 interludes. This audio version, however, is only part I of the first novel! Maybe it's unabridged, but it stop at the end of part I -- not even the whole first novel, "The Man of Property." Hugely disappointing!!

Would you listen to another book narrated by Peter Joyce?

I was looking for more performance, but a good story nevertheless. looking forward to the others.

I am a huge fan of the Victorian novel, particularly those written by Anthony Trollope.
Galsworthy presents his people as types nd types he does not like. Trollope likes people and hopes will like the ones he introduces us to. They are not simply types, but complex characters. Galsworthy writes well enough for me to finish his books but don't expect any outliers here. This is well read though I prefer less acting than reading. This novel is for anyone interested in a tale well told.

Impressive and Enjoyable but a bit short

This appears to be an older recording as it refers to "Sides" - presumably of a cassette - but it is none the worse for that. Peter Joyce impressed me by making all the Forsytes sound different, including the women. His reading showed how skilled Galsworthy was at implying how a character feels, while also showing how they behave. The Forsytes came to life, pompous but pitiable. Just a bit disappointing that this was only book 1 given that many more recent and longer sagas can be purchased as one credit.