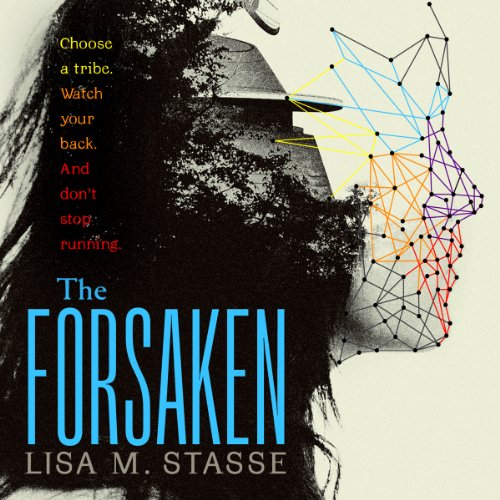 Choose a tribe. Watch your back. And don’t stop running.

Filled with thrilling adventure and romance, The Forsaken is praised by EntertainmentWeekly.com as "a fast-paced novel [that] you’ll get sucked into. You just can’t seem to put [it] down."

As an obedient orphan of the U.N.A. (the super-country that was once Mexico, the US, and Canada), Alenna learned at an early age to blend in and be quiet - having your parents taken by the police will do that to a girl. But Alenna can’t help standing out when she fails a test that all 16-year-olds have to take: The test says she has a high capacity for brutal violence, and so she is sent to the wheel, an island where all would-be criminals end up.

The life expectancy of prisoners on the wheel is just two years, but with dirty, violent, and chaotic conditions, the time seems a lot longer as Alenna is forced to deal with civil wars for land ownership and machines that snatch kids out of their makeshift homes. Desperate, she and a charismatic warrior named Liam concoct a potentially fatal plan to flee the island. Survival may seem impossible, but Alenna is determined to achieve it anyway.

Forsaken reminded me a lot of a dystopian Lord of the Flies. Keeping the Battle Royal theme of sending kids to a remote island and letting the strongest survive, the author avoids the typical mistake of having her heroine suddenly able to fight and kill - but doesn't turn her into a hapless maiden needing constant saving, either. So while there isn't necessarily anything new to the genre here (oppressive government, random death, a battle to survive after being outcast, sappy romance), at least we have something solid. I was greatly reminded of the second Hunger Games novel through several of the characters as well as the location.

Alenna is an orphan - her parents were taken and killed as rebels in a world run by a messianic leader who united North America after resources ran out in an overpopulated world. Children are tested at 16 to make sure they don't have latent violent tendencies - and Alenna is sure she will have no problem passing the test. Until she wakes up on a remote island where most only survive 1-2 years as groups battle each other for the limited resources.

The author skips a lot of the world building and concentrates mostly on the action. I had worried this would be as gory as Battle Royale but it was surprisingly light despite all the action. Alenna is a relatable figure - someone who has to learn how to survive by learning the rules of the island. An intriguing 'friend' comes into play who may or may not have ulterior motives (he's my favorite character by far) as well as other interesting co-inhabitants make for an interesting read. There will be a lot of interesting political and romantic machinations by the time this first book ends.

So although some of the later survival scenes did stretch credibility, I enjoyed Forsake and will be continuing the story. I listened to the Audible version and enjoyed the narration.