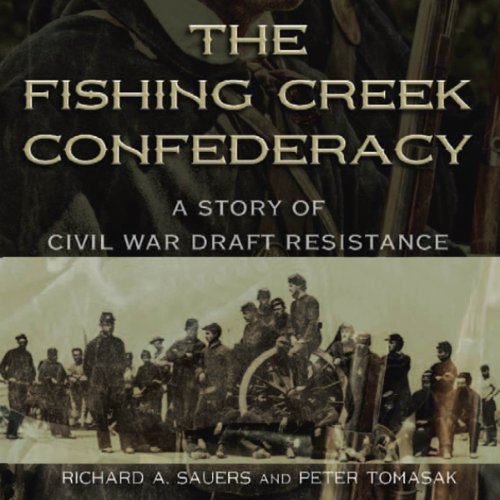 By: Richard A. Sauers,Peter Tomasak
Narrated by: Don Sobczak
Try for $0.00

One hundred and fifty years after the Civil War, Abraham Lincoln is still thought of as one of the best presidents of the United States. However, most Americans forget that he was elected with only 40 percent of the popular vote. Many Democratic newspapers across the North mistrusted Lincoln's claim that he would not abolish slavery, and their lukewarm support collapsed after Lincoln announced his preliminary Emancipation Proclamation in the fall of 1862. The advent of a national draft in the spring of 1863 only added fuel to the fire with anti-Lincoln Democrats, who argued that it was illegal to draft civilians. Many newspaper editors advocated active resistance against the draft.

Governor Andrew Gregg Curtin of Pennsylvania was a staunch supporter of the Lincoln administration. The commonwealth supplied more than 360,000 white soldiers and 9,000 black soldiers during the conflict. However, there was sustained opposition to the war throughout the state, much of it fanned by the pens of Democratic newspaper editors. Though most of the opposition was disorganized and spontaneous, other aspects of the antiwar sentiment in the state occasionally erupted, creating major incidents.

In The Fishing Creek Confederacy, Richard A. Sauers and Peter Tomasak address the serious opposition to the draft in Columbia County, Pennsylvania, in 1864. Egged on by the anti-Lincoln newspaper editors, a number of men avoided the draft and formed ad hoc groups to protect themselves from arrest. In July 1864, the shooting of a Union lieutenant confronting draft evaders resulted in military intervention in the northern townships of the county. The troops arrested more than one hundred men, sending about half of them to a prison fort near Philadelphia. That fall and winter, some of the men were subjected to military trials in Harrisburg, the state capital. The arrests led to bitter feelings that were slow to die. The military intervention eventually impacted a Pennsylvania gubernatorial election and led to a murder trial.

Sauers and Tomasak describe the draft in Pennsylvania and consider how Columbia County fit into the overall draft process. Subsequent chapters take the reader through the events of the summer of 1864, including the interaction of soldiers and civilians in the county, the prison experiences of the men, and their trials. Later chapters cover the August 1865 Democratic rally at Nob Mountain and the effects of the draft after the war ended, including its influence on the 1872 election for governor, the 1891 murder trial, and the formation of the official Democratic version of the events, which has been used by historians ever since.

The Fishing Creek Confederacy is the first book to address this episode and its aftermath in its entirety. Sauers and Tomasak present the story and try to disentangle the often contradictory nature of the sources and how both amateur and professional historians have used them.

"Richard A. Sauers and Peter Tomasak have done an impressive job of researching the National Archives and local newspapers to uncover the fascinating details about the Fishing Creek Confederacy in 1864. Their insightful and detailed book is by all means the best case study of anti-Lincoln ferment in the North during the Civil War. It is a welcome addition to the growing literature on life and politics in the Union homeland ." (Earl J. Hess, author of The Civil War in the West: Victory and Defeat from the Appalachians to the Mississippi)

What listeners say about The Fishing Creek Confederacy