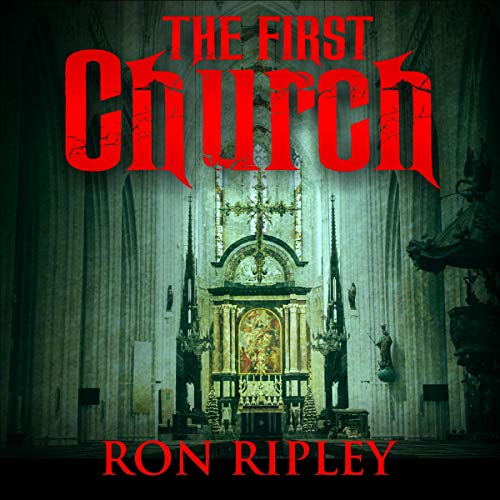 Here’s to saints, sinners, and sake!

The stats are grisly. Two boys blinded. Another boy shot. Cops killed. The bodies keep piling up, and the ghosts’ thirst for vengeance is as insatiable as their thirst for sake!

The phantom soldiers cut a swath of murder through the congregation until all that’s left of Brian’s local allies are Jim Bogue and his grandfather Luke Allen, who is a blind Marine vet. They are all that stand between the dreadful ghosts and the helpless locals.

Even as a second threat lurks in the shadows, just as deadly as the gruesome specters, the ghostbusters race against time to save the town.

While trying to protect the living, Brian and his crew are thrust into the unforgiving world of the undead. When the last battle finally begins, Brian wonders if he’s met his own personal Hiroshima....

What listeners say about The First Church

Here's me thinking what could Ron Ripley come up with next for the poor Leonidas group?? I would never, in my wildest dreams, think of Japanese soldiers, whom relish in death and whom reside in a church because some creep put their bones there, just so the ghosts could do what they wanted! Plus these ghosts can shoot ghostly bullets, and cause people to have heart attacks. Which isn't an ideal situation for Brian, considering the amount of heart attacks he's had.

As per usual, Ron Ripley has created another scary edition to this novella range of stories. I have come to expect creepy settings, but here we have a church that's still in use!! It's not abandoned nor particularly scary, well that is until a headless ghost appears suddenly and pokes out the eyes of 2 boys! More and more ghosts seem to be making the church their home, so Brian and the team have to figure out a) why the ghosts are there, b) who put them there and c) how to contain them.

This series has quickly became a kind of bite sized pleasure of mine! The author knows how to capture your attention and he knows how to make your hackles rise and goose bumps appear! I love reading these, but not at night time ;)

In all, another awesome addition to the series. I so can not wait for the next one to come to audio, and that is thanks to the amazing narrator!!

As I've said with all the rest of the books I've listened to that was narrated by him, Thom Bowers made this book so much better. He really knows how to bring a story and the characters to life. He has plenty of tones, cadences and knows what inflection to use when needed! Highly recommend his work!!

I love the way Ron Ripley crosses the characters between stories and Mr. Bower's voice is one of my favorites! I listen to these books constantly and I have found out that I don't like other voices and stories as much! Great job the both of you!

The First Church by Ron Ripley

This is the 5th book in the Moving In series. I do so love this author and the narrator Thom Bowers. If you like scary ghost stories, you will love this book. What do headless ghosts and angry Japanese soldiers have in common? You really must read/listen to this series. I highly recommend them. One more book to go and I can't wait to read it.

I read the Moving In Series books 1 - 5 and Ron Ripley really knows how to take you down a path with a lot of unexpected twists. Thom Bowers adds even more life to the characters in the audio versions. Well done all around!.

Got to love these books

Loved the narrator. Good gritty horror. Thoroughly enjoyed the 3rd book in the series. Looking forward to the next.