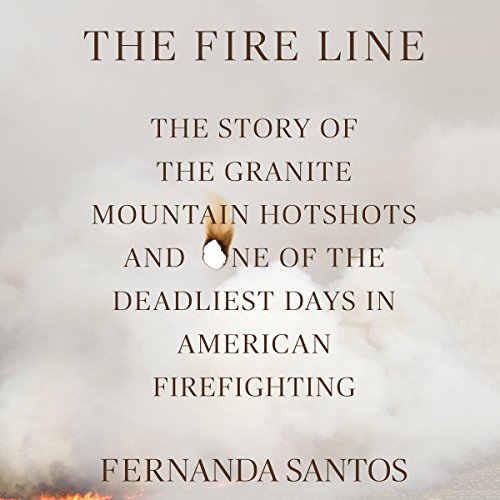 By: Fernanda Santos
Narrated by: Ari Fliakos
Try for $0.00

“In Fernanda Santos’ expert hands, the story of 19 men and a raging wildfire unfolds as a riveting, pulse-pounding account of an American tragedy; and also as a meditation on manhood, brotherhood and family love. The Fire Line is a great and deeply moving book about courageous men and women.” (Héctor Tobar, author of Deep Down Dark: The Untold Stories of 33 Men Buried in a Chilean Mine and the Miracle that Set Them Free)

When a bolt of lightning ignited a hilltop in the sleepy town of Yarnell, Arizona, in June of 2013, setting off a blaze that would grow into one of the deadliest fires in American history, the 20 men who made up the Granite Mountain Hotshots sprang into action.

An elite crew trained to combat the most challenging wildfires, the Granite Mountain Hotshots were a ragtag family, crisscrossing the American West and wherever else the fires took them. The Hotshots were loyal to one another and dedicated to the tough job they had. There's Eric Marsh, their devoted and demanding superintendent who turned his own personal demons into lessons he used to mold, train and guide his crew; Jesse Steed, their captain, a former Marine, a beast on the fire line and a family man who wasn’t afraid to say “I love you” to the firemen he led; Andrew Ashcraft, a team leader still in his 20s who struggled to balance his love for his beautiful wife and four children and his passion for fighting wildfires. We see this band of brothers at work, at play and at home, until a fire that burned in their own backyards leads to a national tragedy.

Impeccably researched, drawing upon more than a hundred hours of interviews with the firefighters’ families, colleagues, state and federal officials, and fire historians and researchers, New York Times Phoenix Bureau Chief Fernanda Santos has written a riveting, pulse-pounding narrative of an unthinkable disaster, a remarkable group of men and the raging wildfires that threaten our country’s treasured wild lands.

The Fire Line is the winner of the 2017 Spur Award for Best First Nonfiction Book, and Spur Award Finalist for Best Western Contemporary Nonfiction.

"In Fernanda Santos' expert hands, the story of 19 men and a raging wildfire unfolds as a riveting, pulse-pounding account of an American tragedy; and also as a meditation on manhood, brotherhood and family love. The Fire Line is a great and deeply moving book about courageous men and women." (Héctor Tobar, author of Deep Down Dark: The Untold Stories of 33 Men Buried in a Chilean Mine and the Miracle That Set Them Free)

What listeners say about The Fire Line

heartfelt story. i didnt know a single one of these gentlemen but by the end i felt that i had lost 19 brothers!!

The heartbreak for me after listening can be but a mere fraction for those that lived this modern day story of loss and grief. This story of optimistic young lives snuffed out as quick as they seem to start is weaved seamlessly with the selfish human actions at the root cause of these fires. This book will make you feel the hope of achievement, as well as the heartbreak of young people dying for a cause. Anger also is a strong emotion elicited by this book, as we are shown a mirror for our own egotism despite the ecological warnings. Very powerful and will leave you walking with a sick feeling of loss--though this lesson is one that needs to be felt.

This is a good story, mostly biographical about the Granite Mountain Hotshots. The author does a good job of weaving the bios into the history and timeline of the Yarnell fire that cost the lives of 19 fire fighters. The story ends with the funerals and a bit of followup on compensations.


What other book might you compare The Fire Line to and why?

Fire on the Mountain (better)
The Big Burn (much better)

The narration is mostly easy to listen to, even at 1.5x, But he mispronounces many of the common plant names, particularly any with a Spanish origin, such as Saguaro. That just shows lazy prep for the reading by ARI FLIAKOS.

<br />A story that needed to be told this way.

An Encompassing, Emotional and Fact-Packed Overview of the Yarnell Fire Accident

This book is not only for those in search for reliable and accurate information regarding the Yarnell Hill accident, but for anyone in need of inspiration, perspective, and an excellent audiobook.

Fernanda Santos is a skilled and gifted author and reporter, who did extensive in loco research, right after the Yarnell Hill accident, while the fire was still raging. She personally interviewed all persons involved in and affected by the accident.

This book truly is a work of love, but also a very professional and sober one, with lots of lessons here for everyday's life.

I really enjoyed this book. I have the movie and always wondered about the little details. This book goes thru it all. Every detail you want to know the author covers in a beautiful gut wrenching detail. I smiled, I cried and then felt I understood the details surrounding the event. I really enjoyed the book. It was a beautiful tribute to a group of wonderful good men and the people who loved and supported them. If you ever were curious about the days, day of and days after the event. This is a great book to read.

Content: Closely mirrors movie. Could have been made more dramatic but perhaps that would not have been author's intent.

Where does The Fire Line rank among all the audiobooks you’ve listened to so far?

Excellent story - flows well, and the narration is great.

I live in Gilbert, AZ and remember still how this fire affected our whole state. This is a tragic story, and heartbreaking but also what a wonderful tribute to the fallen Hotshots.

What an amazing book

I would give the text version of this book 5 stars. It is a beautifully written homage to the man of granite mountain. However the production company took no interest in learning proper pronunciation of a lot of wildlife and locations in Arizona which made it tough to get through.