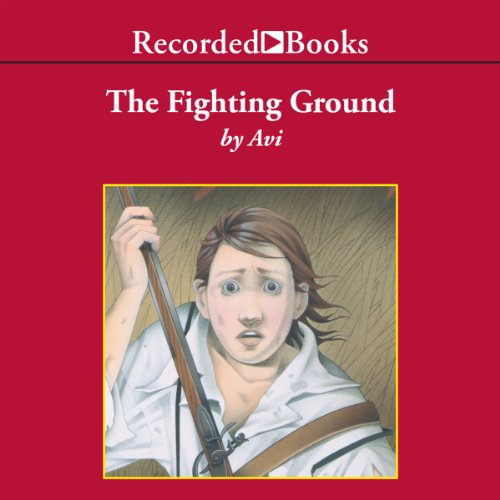 Jonathan’s older brother is away fighting with General Washington in Pennsylvania. But at 13, Jonathan is too young to fight. Still too young. Then one morning, April 3, 1778, the tavern bell sounds, calling men to arms. Eager to prove his mettle, with blood pounding in his ears, Jonathan joins the gathering men at the tavern to hear the news. With a 12-pound, six-foot-long flintlock musket loaned to him by the tavern keeper, Jonathan finds a place in with the other men, marching to battle. Then the moment arrives - the distant sound of drums and the terrible whine of the fife. As the troops march into view, Jonathan sees 30 soldiers - all moving in perfect formation, a bayonet at every waist. "Hessians," the man next to Jonathan said. "Hessians."

Avi is author of the Newbery-winner The True Confessions of Charlotte Doyle. In The Fighting Ground he recounts one unforgettable day in the life of young Jonathan, a naive New Jersey farmboy eager for war.

What listeners say about The Fighting Ground

The listening experience was not the problem; it was the story itself. I think that it sends a some dangerous messages to its adolescent readers, and there are many events that are completely unbelievable. It also possesses a tone of being anti-war in general.

What was most disappointing about Avi’s story?

Both the abandonment of the boy and the three Hessian soldiers by their respective armies seem a little contrived. The thing that is hardest to believe about this story is that the Hessians did not kill the boy. Any Hessian soldier would certainly not have taken a prisoner unless that prisoner was likely to possess valuable information. The Hessians made no attempt to interrogate the boy, so they should have killed him.

The fact that the Hessians just went to sleep with an enemy soldier in the house is completely unbelievable. All the Hessian did was to tie a rope around the boy's ankle and his own ankle. Why didn't the Hessian tie both of the boy's hands behind his back? These well-trained, strongly disciplined soldiers then slept without posting a guard. That whole situation is incredulous.

After the Hessians are all dead, the colonel tells the boy to get his gun and reminds him that it is borrowed and that he is responsible for it. The boy deliberately destroys the tavern owner's rifle in a fit of rage even though he gave his word that he would return it. He is old enough to realize that a rifle is the single most expensive possession that most men own, and he doesn't even have the courtesy to apologize to the gun's owner for not taking care of it nor does he offer to pay for it or to work to help make up for the loss.

Most other reviews talk about how the boy becomes a man in this story, but I fail to see that. The boy's views on war certainly change, but, to me, he is still the same irresponsible kid that he was in the beginning who has come close to committing treason when he awoke the Hessians. What if the Hessians had killed one or more of the Americans? The boy probably would have been hanged as a traitor, and his behavior concerning the gun was inexcusable.

Besides so many unrealistic acts that the author expects us to believe, I see several dangerous messages in this story. First, it implies that it is acceptable behavior for a 13-year-old to lie indiscriminately and to be irresponsible with the belongings of others. It shows that it is fine to run from a battle in a war and to disobey your commanding officer. That is ridiculous. In a war, soldiers cannot be permitted to decide for themselves which orders they will follow and which they will not; the result would be chaos and unnecessary loss of life. This book undermines that reality, using an anti-war tone. The boy's father is anti-war and the boy returns with that attitude as well. If all the colonists had had that attitude, our great country would never have existed.

He did a good job of reading it.

The writer does a good job of describing the march to the battlefield, how the boy felt, and what the other soldiers were doing and feeling. There is an excellent description of the Hessian army and its reputation for savagery. Just before the battle is to commence, there is also a good description of the boy's trying to load the musket under such strenuous circumstances and about the boy's fears of looking stupid and afraid in front of the men.

I think the book was great and that the readers feeling is greatly touched by this book I really liked it. 😄

Good perspective for my students

Great for 5th graders. They found it surprising and interesting. Not as exciting as they would have liked, however. Good!

The narrarator was on point and read very well but the book over all was just boring theres really nothing audible could do, I just wish the author did a better job writing the book.

Has The Fighting Ground turned you off from other books in this genre?

The Fighting Ground has definitely turned me off from other books in this genre.

Which character – as performed by George Guidall – was your favorite?

Honestly I didn't like any character they all could be improved.

Did The Fighting Ground inspire you to do anything?

All the fighting ground inspired me to do was never read another war book again.

The audible staff is wonderful and I was very satisfied with the narration but like I said the book was an zero out of five stars in my opinion.