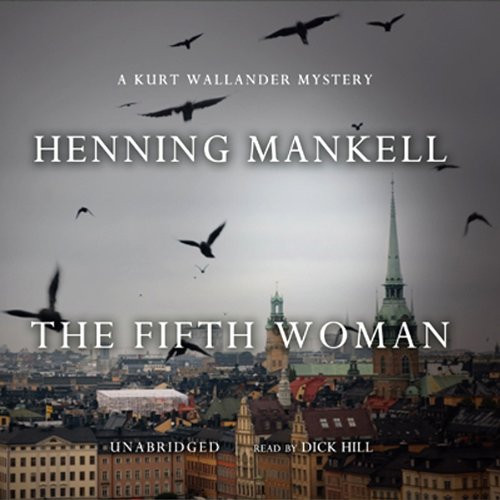 In an African convent, four nuns and an unidentified fifth woman are brutally murdered, and the death of the unknown woman is covered up by the local police. A year later in Sweden, Inspector Kurt Wallander is baffled and appalled by two strange murders. Holger Eriksson, a retired car dealer and bird watcher, is impaled on sharpened bamboo poles in a ditch behind his secluded home, while the body of a missing florist is discovered strangled and tied to a tree. The only clues Wallander has to go on are a skull, a diary, and a photo of three men.

What ensues is a case that will test Wallander's strength and patience, for in order to solve these murders he will need to uncover their elusive connection to the earlier unsolved murder in Africa of the fifth woman.

What listeners say about The Fifth Woman

I often expect to be entertained with a good mystery, but my expectations save for a handful of writers usually end right there. This is my first Mankell novel, and I'm savoring the prospect of now reading more.

The book is atmospheric and touching, the plotting deft and this is no mean task since lesser writers would have held the reader captive with the gruesome and grisly torture and carnage that send the book's protagonist on his detecting mission.

The character development is superb, this book transcends the genre classification of "mystery" and is, rather, a novel and a fine one in the best sense of the word.

The narration was also strong, and in the end the book made me reflect, gave me pleasure in describing landscape, a father-son relationship, and police team relationships, and finally entertained, I could not stop listening. An excellent read, I look forward to making up for last Mankell time now!

This was my first outing into European NOIR. I am very attached to Michael Connelly so the bar was rather high. I really liked the way the author set up the various aspects of the story to then bring them together. I like the ending and reflections of the villian. I also liked to picture the various towns and characters via the swedish accent. Good story telling.

Kurt Wallenger does it again

The story is well paced and our hero is real and as usual shows his weaknesses with all his strenghts. Loved the voices of the charactors and the dialog was real

I truly enjoyed this novel. It reminds me of life before we were so technologically advanced (neither good or bad opinion is implied here). This is not a quick-action book,but rather one that shows the rather plodding, methodical approach that is required to solve a murder. It presents the whole life of the protagonist rather than just the part that revolves around the mystery being solved. I found the reader fine. My problem was more with the foreignness of the Scandinavian names. I am looking forward to reading more books by Mankell.

This book recalls the Old Testament dictum of "An eye for an eye". Or the concept of Karma, where what you give out is what you get back.

Its different. In the end we almost feel sympathy for the murderer, and antipathy towards the victims.

I enjoyed this different-ness. The reason I didn't give it four stars is simply because this is not my favourite genre.

Well, I guess I've become quite the Mankell fan now. After listening to this great tale, I realize I must now go back to the beginning of the series and start with Book 1 and read through each one up to the time of this novel. Kurt Wallander is such an intriguing character. Actually, all of Mankell's characters are fascinating. Be aware, that if you're the type who has to have high-pitched action, bang-bang-shoot-'em-up, and endings where everything is blown to smithereens - then Mankell is not for you. I saw these described as "cerebral" detective stories ... they're so much better than that, but the stories are intricate and well-plotted. The best thing I can say about Mankell, and Hill's terrific narration, is that you find yourself immersed in the stories from the start.

I purchased this book, along with some others, based on others' reviews. Please! Who are the people who review some of these books. I find myself attempting so hard to finish some of these books simply because I paid for them. In the end, I remind myself that there are simply too many great literary works out there to waste one's time on drivel.

This book has moments where you become a bit interested, but it always moves back to yawning parts that one has to work to get through. I simply would skip purchasing the book. It's NOT worth it.

Make sure you are tuff enough to endure

Story was good but the author is relentless about presenting information overload. After getting into the story I felt like the author was pretty sure I couldn't process information so he fed the story to me in baby bites guided by s sledgehammer. Reminded me of why I don't enjoy Russian writers for the most part....but I will say the story was good and Dick Hill did his usual good job.

Yet another Murder by Narrator

The reader on this one is so bad I couldn't even hang in, and that's new for me despite the plethora of bad readers. He overacts horribly and most of the time he not only puts huge, portentous pauses between each word, he puts them between the SYLLABLES of each word!

Normally, I can extrapolate the quality of a story from underneath a bad reader but, in this case, it was too much of a mess. I'd have given the author the benefit of the doubt enough for a 3, but the premise wasn't remotely believable, and had nearly a complete absence of background.

This book was well read. The story is set in Sweden and the reader has a Scandanavian accent. The story is quite good and seems fairly original.