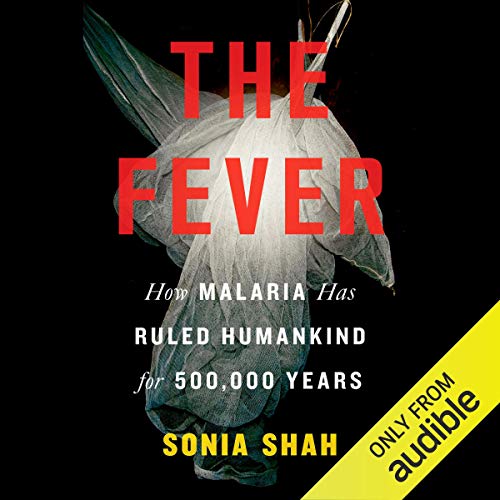 By: Sonia Shah
Narrated by: Maha Chehlaoui
Try for $0.00

In recent years, malaria has emerged as a cause célèbre for voguish philanthropists. Bill Gates, Bono, and Laura Bush are only a few of the personalities who have lent their names - and opened their pocketbooks - in hopes of curing the disease. Still, in a time when every emergent disease inspires waves of panic, why aren’t we doing more to eradicate one of our oldest foes? And how does a parasitic disease that we’ve known how to prevent for more than a century still infect 500 million people every year, killing nearly 1 million of them?

In The Fever, the journalist Sonia Shah sets out to answer these questions, delivering a timely, inquisitive chronicle of the illness and its influence on human lives. Through the centuries, she finds, we’ve invested our hopes in a panoply of drugs and technologies, and invariably those hopes have been dashed. From the settling of the New World to the construction of the Panama Canal, through wars and the advances of the Industrial Revolution, Shah tracks malaria’s jagged ascent and the tragedies in its wake, revealing a parasite every bit as persistent as the insects that carry it. With distinguished prose and original reporting from Panama, Malawi, Cameroon, India, and elsewhere, The Fever captures the curiously fascinating, devastating history of this long-standing thorn in the side of humanity.

What listeners say about The Fever

Reasonably well spent; as described below, a few complaints about the tone of some of the book.

Would you be willing to try another book from Sonia Shah? Why or why not?

Possibly, but she spent a bit too much time anthropomorphizing the parasite and used too many metaphors and inapposite verbs when describing parasite's evolution (giving the false impression of intent and direction to the randomness of evolution).

Sort of; the narrator was fine, but underwhelming.

Could you see The Fever being made into a movie or a TV series? Who should the stars be?

No; this is non-fiction unsuited to dramatization.

This book was OK. The pros: good introduction into malaria, it's impact and longevity on human society, and the mechanisms of its infection and treatment. The cons: the author spends way too much time anthropomorphizing the parasite (and in doing so, hits all my pet peeves in discussing how the thing mutates and evolves and imbuing such changes with direction and forethought) and is sometimes a little disorganized. Overall, perfectly fine book if you'd like some context and history of malaria, but be prepared to have the author describe the parasite as plotting and maneuvering, rather than just describing the constant arms race all living things engage in (where the mutations are not intended or directed, but happen by accident and bestow increased survival and thus - without having aimed to do it - end up in the next generation).

if u work with malaria, it's a go

the book is not well paced, nor well narrated, imho. but the information and the take is super relevant. a must go for researchers and people involved with malaria.

Principles here are applicable to Sars / Covid. We are making the same errors with Covid.

This is a comprehensive story of a very complex issue. Unfortunately it’s non-chronological presentation makes it more difficult to understand and follow the timeline. I wanted to enjoy this book more since it is well researched, however it is presented more as a series of scientific presentations, than a history of malaria. The concluding sentiment which I believe to be absolutely true, is that malaria is here to stay for the foreseeable future.

A joy to listen

I was intrigued by my personal experience with Malaria and learned about it in the very interesting story here. Very compressive and with scientific evidence.

An engrossing tale of a massive disease

As modern Americans we rarely hear of malaria, much less see it's impact... when I traveled abroad I realized the scale and impact of this in many lands, third world & developed. An good overview of malaria's real impact & swath.

The world's most important problem

3000 children die EVERY DAY in Africa from malaria. Why? This book answers that complex question with history, science, and sociology. Every chapter was exciting, informative, and provided a unique perspective. Beautiful and frank prose. Solid narration.