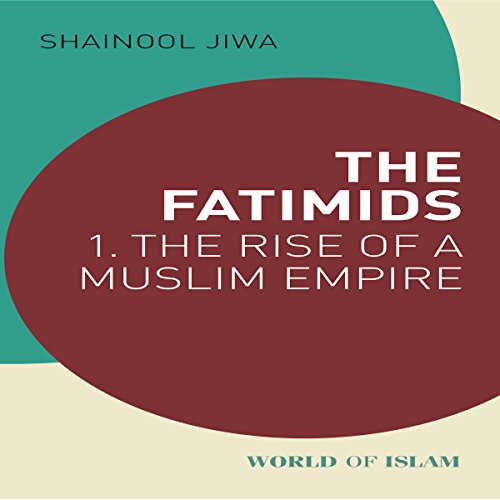 The Fatimids: 1. The Rise of a Muslim Empire

By: Shainool Jiwa
Narrated by: Sarah Kate
Try for $0.00

Emerging from a period of long seclusion, in the year 909, the leader of the burgeoning community of Ismaili Shi‘i Muslims was declared the first Fatimid Imam-caliph. Abd Allah al-Mahdi founded the only sustained Shi‘i dynasty (909-1171) to rule over substantial parts of the medieval Muslim world, rivaling both the Umayyads of Spain and the Abbasids. At its peak, the Fatimid Empire extended from the Atlantic shores of North Africa, across the southern Mediterranean, and down both sides of the Red Sea, covering also Mecca and Medina.

This accessible history, the first of two volumes, tells the story of the birth and expansion of the Fatimid Empire in the 10th century. Drawing upon recently available eyewitness accounts, Shainool Jiwa introduces the first four generations of Fatimid Imam-caliphs - al-Mahdi, al-Qa'im, al-Mansur, and al-Mu‘izz - as well as the people who served them and those they struggled against. Listeners are taken on a journey through the Fatimid capitals of Qayrawan, Mahdiyya, and Mansuriyya and on to the founding of Cairo. In this lively and comprehensive introduction, we discover various milestones in Fatimid history and the political and cultural achievements that continue to resonate today.

Dr. Shainool Jiwa is a senior faculty member at the Institute of Ismaili Studies, London. As a specialist on the Fatimids, she has written and lectured extensively on medieval Islamic history and has edited and translated key medieval Arabic texts relating to Fatimid history, including The Founder of Cairo (2013) and Towards a Shi'i Mediterranean Empire (2009). Dr. Jiwa is also the co-editor of The Shi‘i World: Pathways in Tradition and Modernity (2015).

What listeners say about The Fatimids: 1. The Rise of a Muslim Empire

Finally there are audiobooks!

It's wonderful that the Institute of Ismaili Studies is producing audiobooks and electronic publications. This is a wonderful introduction to the Fatimids and the empire they created. I can't wait for part 2 of this series.

I'm glad there is an audiobook available about this interesting chapter of Islamic history. This one, however, gives little context or analysis, functioning more like a simple chronicle of events.

Great intro to the topic

loved it. simple yet detailed.
only downside being that narrator lacked a sense of life & passion.

the content however indled within me a fascination for this empire & their history.
look forward to part 2.

What a delight! A remarkably well-written account of Fatimid beginnings, using simple yet provocative language, with the right blend of historical rigour narrated with 'novel spice'. You truly feel as if you are re-living history through this very animated and gripping authorship.