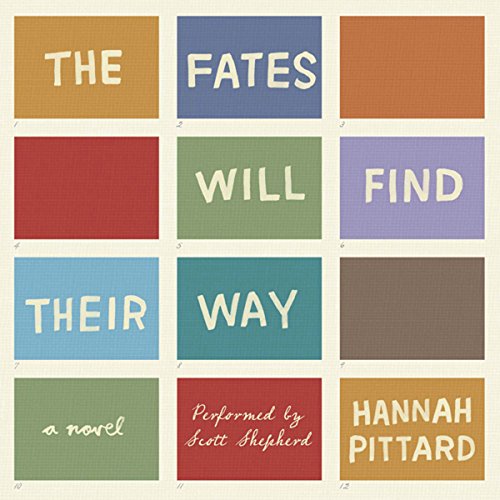 The Fates Will Find Their Way

By: Hannah Pittard
Narrated by: Scott Shepherd
Try for $0.00

Sixteen-year-old Nora Lindell is missing. And the neighborhood boys she's left behind are caught forever in the heady current of her absence.

As the days and years pile up, the mystery of her disappearance grows kaleidoscopically.

A collection of rumors, divergent suspicions, and tantalizing what-ifs, Nora Lindell's story is a shadowy projection of teenage lust, friendship, reverence, and regret, captured magically in the disembodied plural voice of the boys who still long for her.

Told in haunting, percussive prose, Hannah Pittard's beautifully crafted novel tracks the emotional progress of the sister Nora left behind, the other families in their leafy suburban enclave, and the individual fates of the boys in her thrall. Far more eager to imagine Nora's fate than to scrutinize their own, the boys sleepwalk into an adulthood of jobs, marriages, families, homes, and daughters of their own, all the while pining for a girl - and a life - that no longer exists, except in the imagination.

A masterful literary debut that shines a light into the dream-filled space between childhood and all that follows, The Fates Will Find Their Way is a story about the stories we tell ourselves - who we once were and may someday become.

"Pittard leads the reader into a slew of possibilities spinning out from a 16-year-old girl's disappearance, in her intriguing, beguiling debut.... Though the truth about Nora remains tantalizingly elusive—the reader is never quite sure what happened—the many possibilities are so captivating, and Pittard's prose so eloquent, that there's a far richer experience to be had in the chain of maybes and what-ifs than in nailing down the truth." ( Publishers Weekly)

What listeners say about The Fates Will Find Their Way

Mexican and Indian accents should not sound alike

This is the first review I've ever written, but the narrator really hindered the experience of this novel for me. I didn't like the story either-- it felt like a list why writing a story as "we" can go terribly wrong-- but Shepherd's monotonous tone, inability to adjust to characters' voices, and unbearable "foreign" accents made it drag the whole way through. Don't do it.