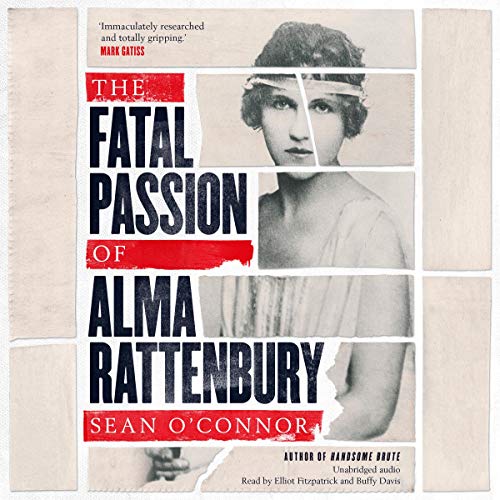 The Fatal Passion of Alma Rattenbury

By: Sean O'Connor
Narrated by: Elliot Fitzpatrick,Buffy Davis
Try for $0.00

Adultery, alcoholism, drugs and murder on the suburban streets of Bournemouth. The Rattenbury case of 1935 was one of the great tabloid sensations of the interwar period. The glamorous femme fatale at the heart of the story dominated the front pages for months, somewhere between the rise of Hitler and the launch of the Queen Mary.

With painstaking research and access to brand-new evidence, Sean O’Connor vividly brings this epic story to life, from its beginnings in the South London slums of the 1880s and the open vistas of the British Columbian coast, to its bloody climax in a respectable English seaside resort.

The Fatal Passion of Alma Rattenbury is a gripping murder story and a heartbreaking romance as well as the biography of a vital, modern woman trapped between the freedoms of two world wars and suffocated by the conformity of peacetime. A startlingly prescient parable for our times, it is the story of a woman who dared to challenge the status quo only to be crucified by public opinion, pilloried by the press and punished by the relentless machinery of the British legal system.

With a wealth of fascinating period detail, from its breathtaking opening to its shocking conclusion, The Fatal Passion of Alma Rattenbury is a true story as enthralling, as provocative and as moving as any work of fiction.

What listeners say about The Fatal Passion of Alma Rattenbury

if you suffer from insomnia, this should help

This book is about as boring as it gets. A shame, considering what an interesting story it is.

Murder and its aftershocks

I knew of this case from reading a slim volume of famous British trials quite some time ago. At first glance, it has all the makings of a classic 1930s crime novel, but the outcome was both tragic and long lasting for those involved or affected. I won't go into too much depth regarding Francis 'Rats' Rattenbury's murder or the subsequent trial for fear of 'spoilers', but it is worth noting the story has several twists and turns that seem unbelievable even all these years later.

Overall, the author has done an excellent job marshaling the facts and has obviously done much legwork in getting hold of source material that was either unavailable at the time; long forgotten about; or kept in family hands. However, there are a few weak spots, including some unnecessary tangents about the international situation facing Britain in the early- to mid-1930s. In addition, the author ties similar murder trials involving older women and younger lovers to the Rattenbury case, placing too much weight on their possible influence, particularly the American examples cited.

Finally, the work highlights the notion of 'patriarchy' and how this shaped the course of Alma's life, as though her fate was determined by forces outside of her control. Yet the choices she made were hers and hers alone, and she certainly expressed little remorse when it came to Rats' murder or did much soul searching with regards to the impact it would have on their children. Her worries primarily related to the loss of reputation and what might happen to her lover, Stoner, who truly was her fatal passion.

Anyway, an excellent work that those interested in of true crime will enjoy - even those familiar with the case - and one that might also appeal to those who enjoy the history of interwar Britain.

PS I thought the narrator did a very good job indeed.

A case never quite closed

The 1935 Rattenbury murder case has never quite gone away, its constant fascination shown for example by the 1975 Terrence Rattigan radio play and the film Cause Celebre in 1987 - and in a host of other crime novel plots.

Alma Rattenbury had been brought up in Canada where she became a gifted pianist and song writer. She served bravely and nobly as a nurse during WW!, the war which left her by the end of it a widow with a young son. Quite quickly she latched onto Francis Rattenbury, a successful architect 30 years older than herself with 4 children and a wife,

They moved to England ending up in uber respectable Bournemouth where Alma had another son after which she and her husband were amicable but slept not only in separate rooms but on separate floors. When 17year old George Stoner (fit young man with a very low level of education) was employed to drive the car, Alma decided immediately to have him. And have him she did - in her bed (whilst her youngest son slept soundly in a bed in the same room) every night. Both Alma and Stoner were smitten in different ways - with no money of her own, Alma lied to her husband that she needed a brief operation which would cost £250 (a great deal of money). She spent it on a spree in London with Stoner, buying him clothes from Harrods and he bought her an engagement ring (with money Alma had given him). Shortly after that spree Stoner apparently bludgeoned Rattenbury to death as he slept in his chair and a long massively publicised double trial for murder followed where a guilty verdict would mean the noose. After Alma was lead away from her house by the police, she never saw her much loved sons again.

The twists and turns of the trial and the subsequent events make riveting listening, so no spoilers. But this is no salacious murder story - through extensive research, the author places the whole story in its social background - from the effect on women who had worked during the war of returning to repressed wifedom, to previous murder cases and executions and social mores and prejudices. He includes biographies of a host of characters including the judge, Stoner's parents, and Irene (Alma's faithful friend and maidservant). The result is an in depth sweep of 1930s England, what had shaped it and where it was going. He also includes a sweep of the decades following the trial examining the ripple effect of the case which has never it seems been forgotten. (One of Alma's sons is still alive). It's also interesting for the evil role played by the Press and the hounding of the public.

The author's prose is suitably low-key and the woman's voice for some of Alma's letters is effective. Elliot Fitzpatrick is a competent but uninspired, unvarying narrator with an odd rush to his reading reminiscent of Tony Blair.

The whole is an excellent listen full of a great deal more than just a murder case.

well researched. couldn't stop listening. narrator's were excellent. well worth a listen. would recommend it.

loved it ,could not stop listening to it and read with perfect clarity and pace.

I really enjoyed this true story. I especially liked the social history of women and crime that put the whole sorry tale into context.

I really got to like Alma - I think she was an extraordinary woman, who achieved a lot who had a passionate fling with a toy boy. It was such a tragic tale.

A well written, well narrated audiobook with a story that is immediately addictive. I listened to this is a day, with no stopping! So glad I purchased this!

The murder, trial and subsequent events are well chronicled - the strange twists of fate years after quite intriguing.
I thought the reader good and delivery not overly hurried.
The writer VERY thoroughly researched the tale - and unfortunately seems to have felt the need to include EVERY discovered snippet - no matter how irrelevant. In the early, context-setting chapters this is a real distraction - does it really matter what flowers some relative had in the bower over the path at their wedding in Canada, many, many years before the events in Bournemouth?
No - there is many a pointless digression which some astute editing should have removed rom the original book.
But stick with it - it's a good story and once Villa Madeira is purchased it's quite gripping.

Yet another waste of money thanks to the awful rushing of the narrator. Otherwise this would have been a good book. Getting fed up with wasting my money and time with good books rubbish narrator. So frustrating.

sounded like an interesting story but it was written wayyyy too broadly. All the detail in the wrong places made it very boring. Don't think i made it a third of the way through.

Good overall but rather spoiled by Buffy Davis as the voice of Alma Rattenbury. Much too gushing and heavily accented.