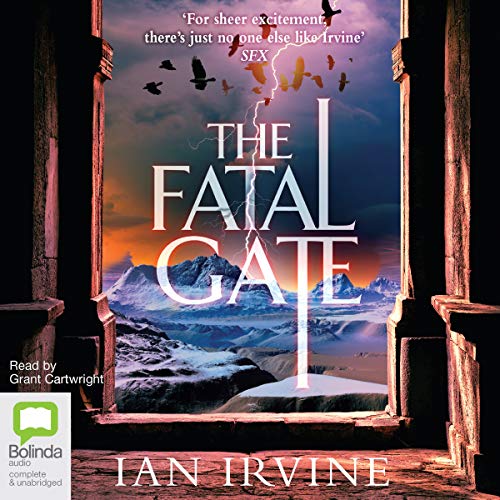 By: Ian Irvine
Narrated by: Grant Cartwright
Try for $0.00

The second book in an epic fantasy series from fan favourite Ian Irvine, set in the world of his View from the Mirror series.

The cruel Merdrun, the greatest warriors in the void, have invaded Santhenar, but their portal failed, leaving them stranded. They're desperately trying to regain contact with the summon stone so they can reopen the portal and begin the slaughter of humanity.

Llian, hurled through another portal, sees the summon stone wake and knows the allies have but one chance to destroy the Merdrun - though it will involve an alchemical quest that has always ended in ruin, a mad invasion in untested sky ships with untrained pilots and the most unequal battle in all the Histories.

What listeners say about The Fatal Gate

Another Briliant story from Ian Irvine can't wait for book three to read what happens.

You have hooked me

You have hooked me and I shall be immediately getting the next book.

Thoroughly enjoyed the old characters and the new ones.

I feel that Ian is achieving his own mastery, this definitely has his feel and style but with greater complexity to the plot and depth to the characters.

The narration is also very good and appropriate, Idlis voice for example.

So good I comsumed it all in a couple of days

This us one of the best books so far. I am liking the new characters introduced in the last two books. Flawed, but they never give up.

Wow. And just like that he throws that in

3 Worlders will love it. Ian, I just can’t get enough, and maybe neither can you. I’m off to read The Well of Echos again 😊