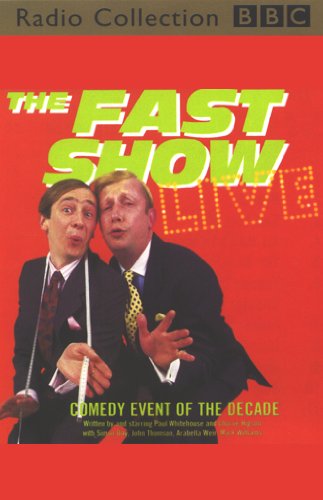 For the first time ever BBC Radio Collection release a live comedy show on audio: The Fast Show Live!

All the favourite characters plus new sketches are included in this hilarious collection taken from the live stage performance of BBC TV's top comedy show.

"Aaah the Theatre! Gielgud, Richardson, Rodney Bewes, the thrill of the spotlight, the gasp of the audience....But who would have expected to see these chaps: Arthur Atkinson, Brilliant, Suit You, Jazz Club, Rowley Birkin, Swiss Show fellows in a ripping stage show....And who would have expected to find me, the 13th Duke of Wybourne, in the Royal box with a magnum of fizzy, a box of havanas, and a clutch of the finest fillies from the chorus line...."

Recorded in February 1998 during the show's month-long run at the Labatt's Apollo Hammersmith, The Fast Show Live used 52 wigs, 84 costumes, 48 people to physically make the show happen, and 47 different scenes. 115,000 people came to see the show, and 30,000 bottles of lager, 2,000 bottles of water, 14 bottles of vitamin B12 mix, 196 Nurofen Plus, and four packs of Diocalm were consumed backstage throughout the run. The set needed seven articulated trucks to transport it, and there were three backstage romances!

Catchphrases featured include "Oh Bugger", "Anyone fancy a pint?", "You ain't seen me, right?", "Where's me washboard?", and "Put your knickers on and make me a cup of tea."