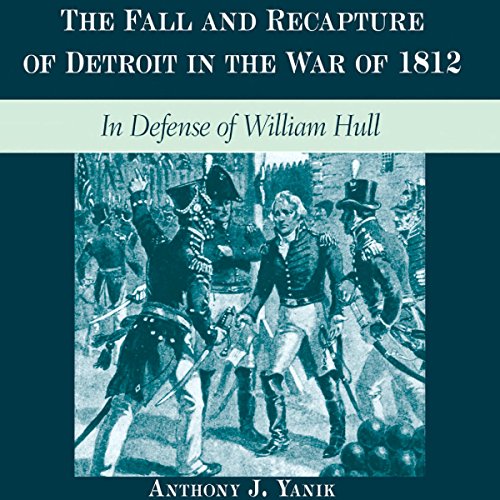 The Fall and Recapture of Detroit in the War of 1812

The focus of the opening campaign of the War of 1812 was Detroit, a location the War Department considered one of the significant launching points for the invasion of Canada. Detroit's surrender only two months after the declaration of war shocked the nation and led to the court-martial of Brigadier General William Hull. Hull was sentenced to death - the only commanding general ever to receive such a sentence in US military history - and has been vilified by many historians to the present day for his decision to surrender. In The Fall and Recapture of Detroit in the War of 1812, author Anthony J. Yanik reconsiders Hull's abrupt surrender and the general's defense that the decision was based on sound humanitarian grounds.

Yanik begins by tracing the political roots of the War of 1812 and giving listeners an idea of what life was like in the tiny frontier settlement of Detroit in the years leading up to the war. He moves on to Hull's appointment as brigadier general and the assembly of the North Western Army in the summer of 1812, culminating in their arduous journey to Detroit and botched invasion of Canada. Yanik then details Hull's surrender and its repercussions for Detroit, including life under British rule and the eventual recapture of Detroit by American forces. Yanik also probes the general's court-martial for cowardice in 1814, arguing that a close examination of the testimony of the witnesses, an analysis of Hull's defense, and a review of the actual events themselves raise many questions about the credibility of the verdict that was issued.

Yanik does not step out of convention regarding the war's cause, so points off for that, but he does positively contribute to the continued restoration of William Hull's reputation. Yanik packs in a lot of good information about this first disastrous campaign of the war. However, his take on Indian atrocities is frequently annoying. He constantly invokes their savage nature without ever pausing to wonder what genocidal things might have been previously done to the natives to engender such hatred. To Yanik, as to white settlers of 1812, they obviously exact bloody revenge simply because they are savages, case closed. I say meh to that interpretation.