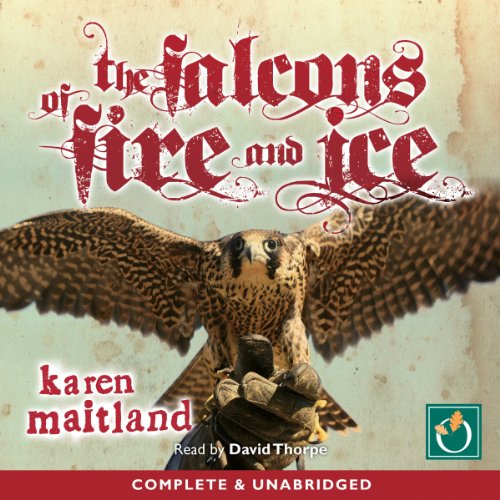 The Falcons of Fire and Ice

The Falcons of Fire and Ice

By: Karen Maitland
Narrated by: David Thorpe
Free with a 30-day trial

1564, Lisbon. The Inquisition displays its power and ruthlessly spreads fear. Heretics are tortured and burned. Isabela, daughter of the Falconer at the Royal Court, is about to be caught in the Church’s terrifying schemes. The slaughter of two of the King’s precious white falcons sees her father arrested and imprisoned.

He and his family will be killed unless the birds are replaced. Isabela decides only she can save her father. These birds are impossibly rare, and she will have to travel far - to strange lands - to find them. Unfortunately the Church has sent a companion to ensure she never returns...

"A tour de force: dark and woven with the supernatural" ( Daily Mail)

What listeners say about The Falcons of Fire and Ice

Karen Maitland is, in my opinion, one of the most impressive and satisfyingly one of the most best informed of writers there is, she writes informatively intelligently and knowledgeably and puts her obtained knowledge into impressive and great stories. I thoroughly enjoyed this book and it was aided by the great reading and interpretational spin placed in the story by David Thorpe who's brilliant accents brought every character to life. This is a great historical story, full of wit and wickedness, taking you on a journey from Portugal to Iceland. There is a unique aura around Karen Maitland's stories which although, factual in their telling, have a unique mystic to them giving them a fantastical ambience and I loved this story for all of the above reasons. This book is worth every penny of your money.

Another brilliant story very well read. If you liked the other books you'll like this.

Slow starter but worth it

Slow to start but brilliant once it picked up, loved the historical content, great performance by the narrator.

This is the first audible title of Karen Maitland's that I have listened to. The rest I read. The story was so well read that I shall definitely get the rest to listen to now.

Took a long while to get into

I loved the other Karen mainland books and am listening in order of them being written but this one took me longer than the others and yes, I almost gave up. Almost. But it was worth it.
Slow to start but a good story and I love the historical references
Going to listen to another now... but hoping it will grip me like the first two rather than this one !

Dark, intriguing and, at times, funny.

A brilliant performance by David Thorpe of a terrific story. Loved the open ending too.

An eccentric combination of voices

What disappointed you about The Falcons of Fire and Ice?

I got this audiobook because i had really enjoyed the reading of Company of Liars. The story here starts out with the interweaving of different stories two characters in Lisbon at the time of the Inquisition. However, (PLOT SPOILER) the story becomes completely mad at the point when they arrive in Iceland - we're talking necromancy, magic and volcanoes - not really my cup of tea at all (but if it is yours then you may well love it).


What was most disappointing about Karen Maitland’s story?

It's implausability - but then i hadn't realised it was kind of magical, so that's not necessarily a fair criticism.

The reading is really very odd - done in various portuguese accents throughout, the young portuguese woman read by David Thorpe is ridiculous, possibly only to be rivalled by the reading of Dona Flavia. For me, it became more or less unbearable. that's not to say he does a bad job, but the style is just not one I could enjoy personally.

What character would you cut from The Falcons of Fire and Ice?

All the ones that had risen from the dead, and probably valdis as well.

One of my absolute favourite narrators for one of my favourite authors...this audiobook is just brilliant!

Excellent story, and sense of place. I really enjoyed it. The narration is really fantastic.

Couldn't listen long enough to give a rating

Would you try another book written by Karen Maitland or narrated by David Thorpe?

Sorry but I just couldn't listen to the accents any more - 42 minutes and I had had enough. Pity because I had very much enjoyed Company of Liars.

Would you ever listen to anything by Karen Maitland again?

No accents! When I have not enjoyed a book it is usually because the accents of the narrator start to grate so horribly that I want to throw my Kindle out the window!!! Many a potentially good book has been ruined for me this way.

Do you think The Falcons of Fire and Ice needs a follow-up book? Why or why not?