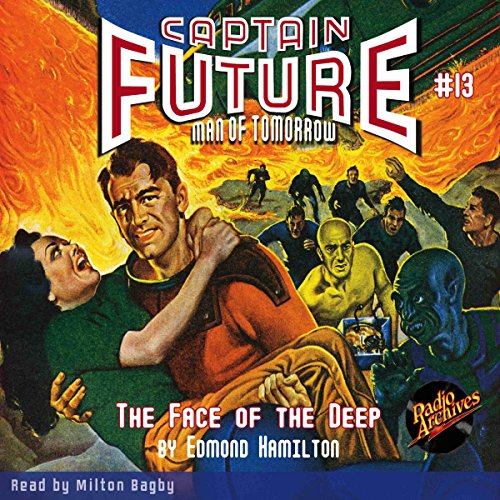 The Face of the Deep

The Face of the Deep

Carried far outside the solar system, and wrecked on a volcanic planetoid in company with a shipload of condemned criminals, Captain Future faces the supreme test of his courage!

Captain Future has no shortage of enemies. Beings from across the universe and beyond plot to dominate planets, to destroy galaxies, and find themselves defeated by Captain Future. Only one of his foes, however, proved evil enough to face Captain Future twice, Ull Quorn, the Magician of Mars.

As Captain Future stories continued to be written, it likely became necessary for Newton and the Futuremen to make their way beyond our own solar system, even our own galaxy. To this end, Captain Future eventually invents the "vibration drive", a device that essentially allows the band of heroes to go anywhere they need to protect the universe. New planets get explored and galaxies unheard of spring into life, all teeming with some mystery and evil for Captain Future to face. Travel between dimensions even becomes possible, as does time travel! With each Captain Future story, the boundaries of where the hero might go grew, eventually only being limited by the fans' imaginations.

Although Captain Future was initially modeled on Doc Savage, hints and influences of other heroes make their way into the stories as well. For instance, the Planet Police summon Captain Future with a signal flare fired into the sky, similarly to Batman, the Phantom Detective, and others. Also, Captain Future has a female interest, although he never fully admits that she might be a romantic one. A member of the Space Patrol, Joan Randall proves in story after story that she can stand alongside the Futuremen and that she also clearly has affection for Curt Newton.

Rocket into science fiction adventure and discover new worlds. Ripped from the pages of the winter 1943 issue of Captain Future magazine, "The Face of the Deep" is read with wonder and excitement by Milton Bagby.