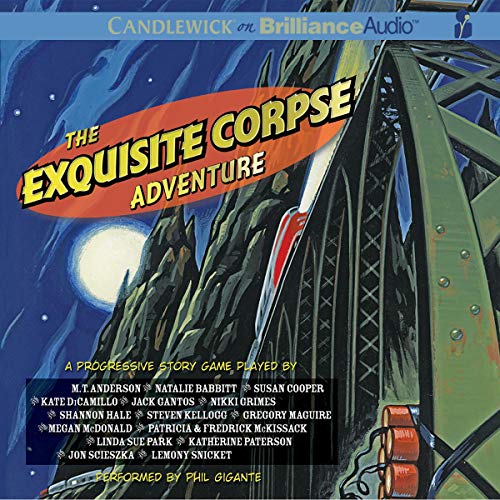 It all starts with a train rushing through the night…. Well, actually, it starts when Jon Scieszka, former National Ambassador for Young People’s Literature, writes a cliff-hanger episode and passes it on to the next member of a cast of celebrated writers, who continue the story and passes it on. And what happens between episodes one and 27? Think werewolves and mad scientists, a talking pig, plenty of explosions, a blue Star Wars lunchbox, two meatballs, a whole army of villains and varmints, and one just plain bad egg. Not to mention the predicaments of our heroes, 11-year-old twins Nancy and Joe, raised in a circus, who must find the pieces of a Top-Secret Robot in order to rescue their parents before… tick, tick, tick!

A collaboration between the National Children’s Book and Literacy Alliance and the Library of Congress’s Center for the Book, The Exquisite Corpse Adventure originated as a national literacy project for young people and helped launch the READ.gov website.

What listeners say about The Exquisite Corpse Adventure

Great Fun for Both Kids and Adults

The book is a progression of cliffhanger episodes, with different authors picking up from the last one to propel the hilarious plot forward. It is the most fun my family has ever had listening to an audiobook together. The plot, the characters and the way the story progresses are exciting, compelling and downright laugh out loud funny.

Each author brings their distinctive style to the narrative, especially the trademark Lemony Snickett phraseology, and yet the book remains cohesive as a whole.

The narrator, Phil Gigante, does a fantastic job - I really think his are the best voice characterizations I have ever heard on Audible. He manages to distinguish between the two main characters - twins Joe and Nancy - so subtly and yet so distinctly, and the "evil laugh" from the bad guy, Boppo the Clown, is perfectly pitched between creepy and funny.

This is definitely one audio-book we will be listening to again and again.

Phil Gigante pulls it off

Would you try another book from the authors and/or Phil Gigante?

Yes, but not written like a tag team where the authors write where one left off. Phil Gigante somehow makes up for the storyline with a great performance.

Has The Exquisite Corpse Adventure turned you off from other books in this genre?

Have you listened to any of Phil Gigante’s other performances before? How does this one compare?

Yes. He does agreat job making a bad story sound good, but with a good story he makes it great.

The authors made a game out of putting the next writer into a stupid storyline.