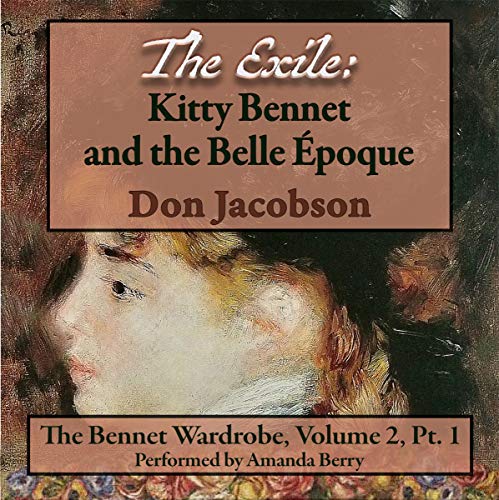 By: Don Jacobson,A Lady
Narrated by: Amanda Berry
Try for $0.00

The day after Jane and Lizzy marry dawns especially cold for young Kitty Bennet. Called to Papa’s bookroom, she is faced with a resolute Mr. Bennet who intends to punish her complicity in her sister’s elopement. She will be sent packing to a seminary in far-off Cornwall.

She reacts like any teenager chafing under the “burden” of parental rules - she throws a tantrum. In her fury, she slams her hands against the doors of The Bennet Wardrobe.

As Lydia later said, “The Wardrobe has a unique sense of humor.”

Seventeen-year-old Catherine Marie Bennet tumbles out of The Wardrobe at Matlock House to come face-to-face with the austere Viscount Henry Fitzwilliam, a scion of the Five Families and one of the wealthiest men in the world. However, while their paths may have crossed that May morning, Henry still fights his feelings for another woman, lost to him nearly thirty years in his future. And Miss Bennet must now decide between exile to the remote wastelands of Cornwall or making a new life for herself in Victorian Britain and Belle Époque France.

The Exile follows the story of Kitty Bennet as she grows from the coughing follower of her younger sister, Lydia, into a bright and engaging young woman living in the exciting world of the late 19th century. However, she must pass through many trials before she can fully understand why the Wardrobe sent her 75 years into the future - and for her to become one of the most important fixtures in the Bennet Wardrobe Universe.

The Bennet Wardrobe Series has been named Best Series of 2017 by More Agreeably Engaged!

What listeners say about The Exile: Kitty Bennet and the Belle Epoque (Benet Wardrobe Series Book 3)

A Heroine Comes of Age and Finds Her Strength

The Bennet Wardrobe universe has provided some of my best audiobook listening experiences so there was only eagerness when I plugged in my earbuds to experience The Exile. Time travel, the Jane Austen world extended beyond her stories, engaging characters, emotional and harrowing experiences in turn, and a wonderful sense of magic provided by that mysterious wardrobe awaited me once again, as yes, this is my second time through after reading the print version earlier.

The Exile is preceded by a prequel, a novel, and a novella, and I would encourage new readers/listeners to take this series strictly in order. In the case of The Exile, Henry Fitzwilliam's War is a don't miss as it pertains directly to a better understanding of what is going on with the Henry Fitzwilliam character of this book.

The Exile focuses on the fourth of the Bennet sisters originally written of in Austen's Pride & Prejudice. Kitty's story begins after the events of the original P&P story when three of her sisters are married and she faces the dreary prospect of being sent off to school in distant Cornwall. In a fit of pique that she is being unjustly punished while Lydia, her co-conspirator, got exactly what she wanted, Kitty rushes to kick her father's wardrobe and, instead, takes a time journey into the future to 1880's where she encounters Lydia as an old woman and a tale that fills her with amazement at her secret family legacy.

The Exile proceeds to share Kitty's adventures that go from content and happiness to dark and horrific. Kitty matures and learns she has an inner strength forged in the fires of adversity. She is remade from the experiences and comes through in the end, but does it lead to the deep love and happiness her sisters experienced?

Some books do not stand the test of time and re-read, but The Exile is not one of them. I knew what was coming and was still buffeted by all the emotions and thoughts I experienced the first time. I smiled, sighed, cried- oh, I cried, and had several heartwarming moments of connection. As I noted before, the familial, fraternal, and romantic relationships and connections are astounding and a big strength to the series. I love how shared experiences brought not just trouble, but showed the strength of the loyalty and love among them all. It was fun encountering the famous fictional and real life easter egg figures sprinkled through out. But, it was also impressive to have true dastardly villains and have the villains score and score deep which kept the listener-reader from complacency and put some strong nuances in the story.

I only had one niggle and it was that sometimes the details- or should I say some of those fascinating historical details that filled the book, since I didn't mind altogether as I love rich, historical background and setting- could slow the pace of the story and side track from the forward movement of the plot.

One caution: There is a capture and rape situation, for those who are not prepared to listen to such a scene at this time.

Amanda Berry narrates and she is the absolutely fabulous voice of the series that I hear even when I have picked up my print versions of this series. She captures characters, emotion, and the world of the stories in a pitch perfect way. The already solid tales are told so that they are even more brilliant.

All in all, this book that ends on an ominous note setting up for what is to come with part two of Kitty's story and the rest of the series was a riveting experience. I didn't want to stop listening and when I did, my mind lingered with The Exile. I can recommend the series to those who enjoy time travel romance, a magical wardrobe, and a clever story with engaging characters.

So much happens in the story, and so many characters show up to help establish the time frame and add dimension. I loved the surprise guest characters, and the layers of this story that seem to hint and lead into a more layered overarching story to come.