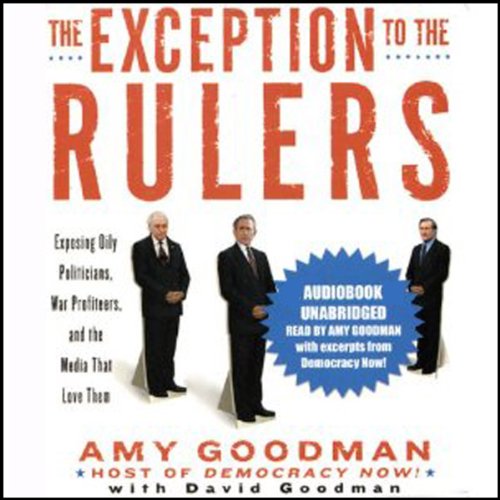 The Exception to the Rulers

The Exception to the Rulers

In The Exception to the Rulers, award-winning journalists Amy and David Goodman expose the lies, corruption, and crimes of the power elite, an elite bolstered by large media conglomerates. Her goal is “to go where the silence is, to give voice to the silenced majority.” This audiobook includes numerous archival audio excerpts, including statements from filmmaker Michael Moore, civil liberties victims describing their harrowing ordeals in the United States after 9/11, correspondent Jeremy Scahill, poet Martín Espada, death row prisoner Mumia Abu-Jamal, and much more.

"Goodman's high-octane blend of investigative journalism and political activism has been the force behind Pacifica radio's Democracy Now!, earning her praise and vitriol alike (not to mention nearly getting her killed by Indonesians in East Timor). Her first book, coauthored with her brother, David, recounts some of her most hard-hitting confrontations with corporate types and politicos of all persuasions...at a compelling, breathless pace." ( Booklist)