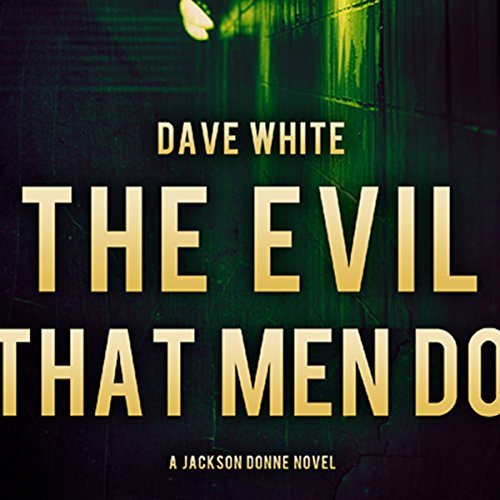 The Evil That Men Do

Nominated for the prestigious Shamus Award, The Evil That Men Do is the second novel in Dave White's critically acclaimed Jackson Donne series.

Even generations later, you can't escape...the evil that men do. Stripped of his private investigator's license and slumming it as a night security guard at a Jersey storage facility, Jackson Donne thinks he's finally hit rock bottom. Then the bottom really falls out: The sister he hasn't seen in years shows up, needing help.

Turns out Donne's Alzheimer's-stricken mother has begun hinting at long-buried family secrets from her hospital bed, suggesting a sinister - even murderous - past. Meanwhile Donne's relatives are suddenly being greeted by blackmail, car bombs, and bullets to the back of the skull.

All Donne wants is to disappear - preferably into a nice frosty pint glass - but he soon realizes that his only chance at saving his family and himself is solving a mystery more than 60 years old. Now he needs to figure out how a hit man, crooked cops, corrupt politics, a kidnapping, and the city of Bayonne all fit together. He'll discover that old family secrets still have the power to kill in this razor-sharp PI story that makes classic noir new again.

What listeners say about The Evil That Men Do

Male voice pretending to be a female drive me nutts