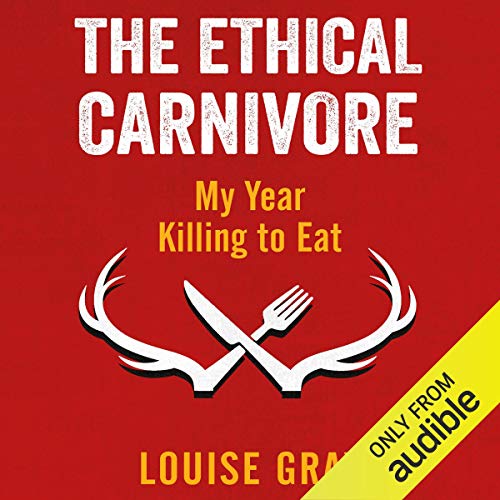 By: Louise Gray
Narrated by: Susie Riddell
Try for $0.00

We should all know exactly where our meat comes from. But what if you took this modern day maxim to its logical conclusion? What if you only ate animals you killed yourself?

Fed up of friends claiming to care about the provenance of their food, Louise Gray decides to follow the argument to its logical extreme. Starting small, Louise shucks oysters and catches fish. Gradually she gets to know countrymen and women who teach her how to shoot pigeons and rabbits. As she begins to reconnect with nature and her own upbringing in the countryside, Louise starts to question modern attitudes to the meat we eat.

How did we end up eating so much meat, with no idea how animals are raised and killed on our behalf?

Louise begins to look into how our meat is processed, including the beef in burgers, cheap chicken, bacon and farmed fish. She researches halal slaughter and visits abattoirs to ask whether modern technology can make eating meat more humane.

She goes on a pheasant shoot and onto a grouse moor and contemplates whether there is still a place for game shooting in modern Britain. And she delves into alternative food culture in the UK, sourcing roadkill and cooking herself a lovely bit of squirrel stir-fry.

The biggest animal Louise kills is a red deer stag, a moment she describes in a chapter about taking responsibility, growing up and her relationship with her own father.

Towards the end of her challenge, Louise explores alternative sources of protein, including insects, in vitro meat and plant-based proteins. She reflects on the impact of the growing global demand for meat and argues that all of us eating less meat should be a key part of fighting climate change.

Louise's writing about nature, food and the environment is liberally dashed with humour and she gets to the heart of modern anxieties about where our meat comes from, asking the most important question of all: is it possible to be an ethical carnivore?

What listeners say about The Ethical Carnivore

I am by no means vegan, the pious attitude that comes with some who adopt that lifestyle does more harm than good for the movement.

From an ethical standpoint, Louise offered up an interesting view that is to be applauded. Thank you.

Great book. Really thought provoking. I'm already planning changes to how my family eats. But readers, please stop doing accents. There's no need for them and they detract from the story.

I hope this book makes it into the hands of both abstainers of flesh and lifelong meat eaters. It will add as much value to those who would never hunt game, as it will to those whose lives revolve around it. The author has broached a difficult subject with intrigue and emotion that is now set to empower a deeper conversation on the subject of provenance and value of our food.

Wonderful! A fascinating and ultimately hopeful look at life death food and hunting. Beautifully read, filled with facts that are all embedded seamlessly into this story of eating only foods you kill yourself. Inspiring. Every meat eater who has ever wondered about what is on their plate should read this.

very well researched and written. fantastic content. extremely informative and interesting. highly recommended for all those interested in the origin of their food.