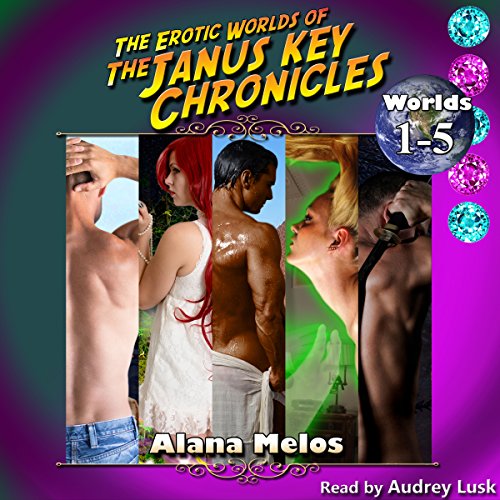 By: Alana Melos
Narrated by: Audrey Lusk
Try for $0.00

Traveling through otherworldly dimensions has never been so sexy....

World 1: Rump Raiding Raptors: The twins find a mystical artifact which brings them to a world populated by raptor men! One has his eye on Dirk, and won't let him go without ravaging him thoroughly!

World 2: The Perils of Penetrating Pixies: Debbie finds herself the center of unwanted attention after consuming an eldritch aphrodisiac. Will she escape the lustful, dangerous intentions of the pixies of this world?

World 4: Savaged by Sadistic Spirits: Finding themselves in a world resembling our 70s, Debbie decides she wants to stay with her hot, hung boyfriend of this world...but will the ravishing spirits of the old manor house let her?

World 5: Knob Gobblin' Hobgoblins: In a fantasy world rife with dark, dangerous desires, Dirk is captured by a tribe of hobgoblins intent on making him breed with all the women of their clan! Will he escape or be trapped by his own lust?

hot story's to listen to.. the time line was cool... a very kinki book.. if you want some thing hot this is for you .

This was a lot of fun. I want to say so much about this about this story but I absolutely hate spoilers, so I won't go into details.
The narrator brings the story to life.
easons I enjoyed this audio book:
Wonderful characters, Page-turner, Great world building, Unpredictable, Original, Easy-to-read/listen, Entertaining, Sexually Action-packed, Twisted, Steamy, Funny.
Bookshelves/tags:
adult, adventure, alternatively-reality, anthology, bisexuality, bondage, captivity, cliffhanger, curse-cure, dragon, fairies, fantasy, ghost, gods, humorous, menage, multiple-partners, mystery, nonhuman, paranormal, series, short, timetravel.
This Audio book was given to me at my request from the publisher, author or narrator and I provided this unbiased voluntary review.

So, I really only picked this one up because it was free and I was mildly intrigued by the premise. If I had to compare it to something, I'd say it was Fringe meets Quantum Leap with a very naughty twist.

Don't expect anything profound out of this book, but it was a heck of a fun ride!

Twins set adrift by a capricious God can only move on via a sexually fueled key. This is a unique set of stories. The five vignettes follow the twins as they find themselves on different worlds, in different times and circumstances, and often among different races (human and otherwise) as they try to get back home. The one constant is that one or the other of them has to copulate, sometimes repeatedly, to move on. Beware, this audiobook is definitely for mature audiences only, I thought the narration a bit childish and silly at first, and I wasn't clear if it was meant to be tongue-in-cheek or taken seriously. Eventually I just settled back to enjoy the ride. It worked for me as light entertainment. This was definitely not sensual eroticism, but more like juvenile orgies. Think Austin Powers.