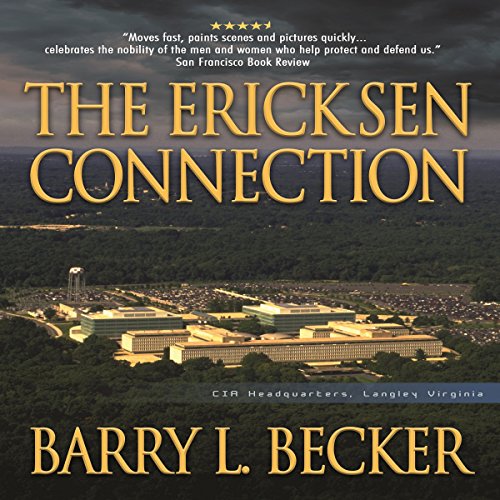 By: Barry Becker
Narrated by: Stephen Mendel
Try for $0.00

The Ericksen Connection is a spy/action/thriller about betrayal, corruption, conspiracy, murder, and terrorism. Mark Ericksen, the former Navy SEAL Team Six platoon leader and successful businessman, was all about duty, honor, and country. After the end of his tour with an elite tier-one team from the Joint Special Operations Command (JSOC) in Afghanistan, the Silver Star Medal recipient resigns his commission on May 10, 2002, enters civilian life, and over the next seven years works for three defense contractors, maintaining a top secret security clearance while concealing his PTSD.

In 2009, The CIA receives actionable intel about a wealthy Saudi businessman planning to attack two American cities with enriched nuclear suitcase bombs, as well as shipping an eight-megaton nuclear warhead loaded on a container ship bound for the Port of Los Angeles. The terrorist mastermind needs to acquire several classified biometrics encrypted communications security systems using the palm-vein scanning technology from EyeD4 Systems, a Wilsonville, Oregon company, in order to maintain communication with his sleeper cell operatives in the United States.

Can Ericksen avoid discovery and thwart the nuclear plots before a network of sleeper cell terrorist operatives achieve their evil goals?

"I enjoyed the book; it moves fast, paints scenes and pictures quickly, and seems believable. The book celebrates the nobility of the men and women who help protect and defend us, both during and after their tours of duty." ( San Francisco Book Review)

What listeners say about The Ericksen Connection

All the elements were in this book: love, sorrow, action, and revenge. Ericksen stays true to himself throughout the journey... Excellent!

What made the experience of listening to The Ericksen Connection the most enjoyable?

The characters were well-developed and the story captured the major challenges facing the United States in its war with militant radical Islamic Jihadists. Another thread focuses on Mark Ericksen (a former SEAL Team Six lieutenant and major protagonist), who is betrayed by his JSOC commander, eventually leading to his Navy resignation and PTSD. When the CIA receives actionable intel from Saudi Arabia about a planned nuclear attack on several American cities, Ericksen's unique capabilities are needed in order to scuttle the horrific attacks.

What other book might you compare The Ericksen Connection to and why?

Vince Flynn's Mitch Rapp, the counter-terrorism operative in his novels.

What does Stephen Mendel bring to the story that you wouldn’t experience if you just read the book?

Mr. Mendel has a deep and rich textured-voice which is enhanced by his ability to portray many Russian, German, Saudi, British and French characters speaking American English with their accents and dialects. Wonderful narrator.

Former Navy SEAL operator and businessman is tasked by the CIA to sabotage a terrorist mastemind's plans to attack three American cities with nuclear weapons.

I enjoyed the novel.