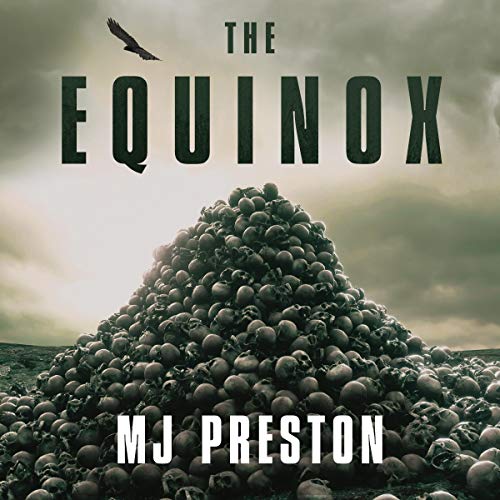 By: MJ Preston
Narrated by: Scott Cluthe
Try for $0.00

It has existed for centuries.

A dark curse held captive by an ancient ritual, a creature of insatiable hunger possessing the ability to change shape at will. During the spring and fall equinox it would break through the walls separating our worlds to feed.

Now it walks among us, unrestrained, and very hungry.

Daniel Blackbird has been chasing the murderous shapeshifter known as The Walker across North America for over a decade. From north of the 60th parallel to the city of Chicago and into the heartland of a small midwestern town in Manitoba, Blackbird follows unrelenting, obsessed with vengeance. In its wake, the Walker leaves a bloody trail of eviscerated victims along the path. Blackbird finds himself drawn to the prairie town of Thomasville where a string of child murders is being investigated.

There, the chief of police, David Logan has uncovered a mass grave in the cornfield of a local farmer named Stephen Hopper. Hopper has confessed, even identified the graves, but claims that he is merely the caretaker of this macabre burial ground and that a creature who he thinks is the devil is responsible.

As Chief Logan grapples with the unthinkable, Blackbird sets out for the prairie town which, as the equinox approaches, is destined to become a killing ground where cultures and worlds will collide.

Will he get there in time? And who will believe him?

What listeners say about The Equinox

The Equinox is an engrossing novel that jumps between the perspectives of Blackbird, a Native American exiled from his tribe so he can confronting an ancient evil, and small-town Chief of Police, Logan, who investigates a series of child-murders. This allows for a mix of mythology and police investigation, told in really distinct scenes with a good sense of place and personality and build-up to the final confrontation with evil. The story might remind you of some of the 1980s-1990s horror novels which played with Native American monsters and vengeful shamans, but don't be put off, Preston is not derivative. Cluthe's deep voice works well for Logan and I'm glad he didn't do a stereotypical Native American accent for Blackbird's chapters. There did seem to be a bad edit around 8 hrs 48 mins. Overall, a big recommend for a Halloween read.
I was given this free review copy at my request and have voluntarily left this unbiased review.

This book gets under your skin

This book will definitely give you the creepy crawlies. It gnaws at the parts of your brain you try not to nourish too often. I am not sure what to say without giving anything away but it's worth your credit.

This was a wild story. I enjoyed it, but didn't love it. Not sure if it was due to the narration or the story itself. The ending was good but I kinda pegged it early on. The idea of tying in traditional monsters from mythology to modern-day adventures is a really fun one and I am glad I had a chance to listen to this book even with the issues I had with it. I had a hard time keeping track of the characters and found myself going back over passages to fully realize the narrative. That isn't an issue in and of itself, but it happened repeatedly and it threw off the continuity for me. I enjoyed the action and the mythology of the monster. Most of the conversations were good, but some of the interactions seemed forced. It was a good book overall though.

It’s ok all in all. It started off strong and kept getting weaker. It felt like a horror movie script from the 80s. Which is a style I love but this didn’t quiet do it for me. Was happy when it was done so I could start something else. Worth a listen if your between books and don’t have anything else on your list.

Enjoyable but end drags out a bit

Towards the end, the narrative felt a little repetitive and tiresome. Also there is no meaningful gender diversity in this book. So few women contribute to the story, in fact, it disrupted my suspension of disbelief. However, if you're in the mood for a good, 1980s style gore-filled pulp this will deliver for sure.

The Equinox is a good story. The narrator just did not for with the dialogue especially doing Native American voices. I loved the storyline but the book was entirely too long. I received this audio book at my request and I am voluntarily leaving an honest review.

really good story. liked the characters. narrator was enjoyable to listen too. only thing was there was a little too much detail on some of the more unimportant scenes, but the quality of the writing made up for it. worth a listen

I love the fact that this book has such a unique storyline, not easy to pull off in the horror genre. Pretty much every horror book I have read instantly reminds me of some horror film/book or another but this book does not. For that fact alone I would recommend this book to every horror fan out there. On top of that it is a great read. The characters are well developed and multi-layered. I loved the way Native folklore was woven throughout the story, it had an old otherworldly feel but is clearly set in modern times. From start to finish this book kept my attention and was very well written. There were a couple of errors that should have been edited out were the narrator repeated sentences, but do not let that put you off the audiobook, this only happened twice and was quickly ignored as you continue with the story. Scott Cluthe does an amazing job at narrating the book. He pulls off a very convincing 'evil monster' voice which was particularly creepy and did a great job at distinguishing the individual voices of the other characters, of which there were many. I was given this free review copy audiobook at my request and have voluntarily left this review.

Absolutely brilliant supernatural thriller. A serial killer and a native American skinwalker . The local police soon find themselves out of their depths.
Dark and gripping.
I highly recommend it.
I received a free copy of this audio book at my own request and voluntarily leave this honest review.

For many years, Daniel Blackbird has been chasing the evil Skin-Walker, a shape-shifting ghoul of Native American lore. As the Autumn Equinox approaches, a time when the walls between the worlds grows thin, his search leads him to a small town where the local police force are dealing with a twisted serial killer and a macabre mystery.

I was absolutely gripped by this story by MJ Preston. Listening to the audiobook, I could almost picture the scenes being played out on a film screen. This was in no small part due to the fantastic narration of Scott Cluthe, who really performs the narrative with gusto and aplomb. I could not stop listening, and found myself binge-listening when I should have been sleeping, so engrossing and engaging was the story and the performance.

Truly a great example of good solid writing. Preston gets to the point, trimming of the fat, to get to the interesting parts. Pretty much every character has a good level of development to the point that they feel like people rather than plot devices. It's easy to get drawn in with some of the great imagery that paints very vivid pictures.

My only real complaint with the book is that it can be somewhat difficult to keep track of characters mainly the police officers. I found myself hearing a name trying to remember who they were. (This is most likely just my poor memory for names but worth a mention)

The narrator (Scott Cluthe) creates a perfect atmosphere for the story to truly take hold. Scott Cluthes overall demeanour perfectly matches the scenes of the book while still keeping a dark tone throughout.

Disclaimer: This book was given to me for free at my request and I provided this voluntary review.

I really enjoyed this story which was set in North America.I also enjoyed getting to know all the believable and interesting characters, the plot was really clever and it kept my brain cells going right until the exciting conclusion.This book is extremely well written and I look forward to reading other books by MJ Preston. The narrator Scott Cluthe was also superb and really brought the story to life.
I received a free copy of this book in exchange for an objective and unbiased review, I highly recommend this book to everyone.