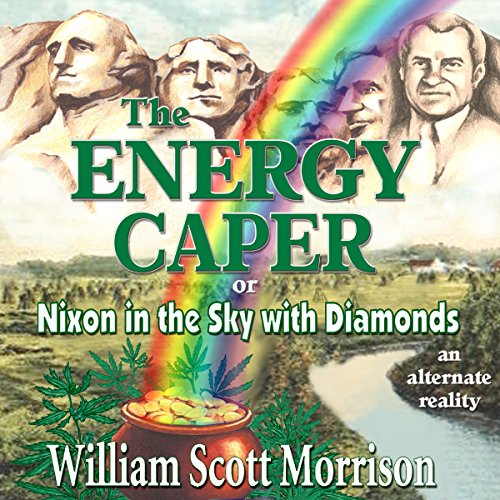 The Energy Caper, or Nixon in the Sky with Diamonds

The Energy Caper, or Nixon in the Sky with Diamonds takes you on a merry romp with a band of twenty-something idealists looking for love and hoping to change the world in an alternate universe in which the Kennedys were not assassinated and the Vietnam War ended before it began. Joining in the fun are President Richard Nixon and Dr. Timothy Leary, the escaped convict Nixon calls "the most dangerous man in the world" for turning America's youth into no-good hippies.

Nixon is the same profane, venal S-O-B that made him such a hit in our universe, but here he is unleashed in a world where there was no Vietnam War to slow him down and Watergate is just a fancy hotel. Elected on a pledge to wage an unrelenting "war on drugs," Nixon instead confronts a different kind of war: an energy war. The Arab oil embargo is driving the country toward a second Great Depression as motorists line up for hours to buy gasoline at any price. Desperate for alternatives to oil, Nixon learns of a plant which produces three times more biomass per acre than corn. America could farm its way to energy independence in just five short years.

A secret weapon has dropped in Nixon's lap, but he is shocked to learn that, under another name, the secret weapon which could defeat the oil cartel is a primary target of his War on Drugs. If he can lead America to energy independence by convincing conservatives to legalize cultivation of the plant Thomas Jefferson called "America's most valuable crop" in the name of national security, the final spot on Mount Rushmore will be his. Nixon knows that only a law-and-order, hippie-bashing conservative like himself could hope to buck America's richest families and most powerful corporations to pull off a caper this crazy.

What listeners say about The Energy Caper, or Nixon in the Sky with Diamonds

If you could sum up The Energy Caper, or Nixon in the Sky with Diamonds in three words, what would they be?

Jenny--because she's smart and has enough of a sense of adventure to get into being Susannah, the famous go-go dancer.

What about William Scott Morrison’s performance did you like?

He does dialogue extremely well. His knowledge of the history of hemp and marijuana is impressive and he weaves it well into the story.

If you could take any character from The Energy Caper, or Nixon in the Sky with Diamonds out to dinner, who would it be and why?

Miss Hattie. I'd love to hear more of the story of how she got the idea of investing in what Andrew Mellon did as well as how she knew what painters to pick.

I thoroughly enjoyed the book. Some scenes were laugh out loud. If only real life were like the plot. Seeing Nixon high on LSD would be more than amazing.
The plot and characters were fun and the information on the history of hemp in America was fascinating.

Fun and thoroughly creative look back at Nixon era

This was a very enjoyable historical walk through the Nixon era. The way the story let you in on our countries long standing lack of a cohesive energy policy through likeable characters and plot twists was really innovative. It was a great reimagination of what might have been taking the reader to unique places and encounters as if you were there and it really happened. I would recommend this to anyone who enjoys historical fiction and especially those who remember Nixon first hand or who find energy policy, or lack thereof, a worthy subject to ponder. I would strongly recommend this book.

The Energy Caper is an energetic alternative history of the United States during the Kennedy and Nixon eras which answers the question, "What would have happened had JFK survived the assassination?" The world would have been a happier place and the author does a great job reflecting that joy in his work.

My favorite character is Art McGill, the hero of the novel. It's always fun when a normal guy accomplishes marvelous things. I identified with him which made it entertaining to follow the plot twists and turns. For anyone who lived through the sixties and seventies this is what might have been, what we all wished it could have been.

What about William Scott Morrison’s performance did you like?

The author performs his own work with his own unique and very personal style. He is very energetic and engaging. This is a good listen especially if you want to stay awake. It's great for those long drives.

If you could rename The Energy Caper, or Nixon in the Sky with Diamonds, what would you call it?

This is a very entertaining novel delivered in a warm and engaging style. I'm very glad I found it and took the opportunity to give it a listen.

Would you listen to The Energy Caper, or Nixon in the Sky with Diamonds again? Why?

I read the paper version of The Energy Caper, a while back and posted a review on Amazon that I enjoyed the novel as much as any fiction I have read in years and I read a lot. At the time, I said, if there is any justice in media representation this novel would show up someday on a best-seller list.

I noted that alternative history is timeless, but the really neat thing about this audio version is that the narration by the author makes it something much more than timeless, it’s like it’s happening now.

The Energy Caper would make a dynamite movie. In any event, this book is a delightful read and an even better listening experience.

The author has a rare talent of infusing infectious enthusiasm into his work in such a way that it will give you a spike of adrenaline. Listen and enjoy a world without the Vietnam War. Great entertainment, just imagine what could have happened without Watergate!