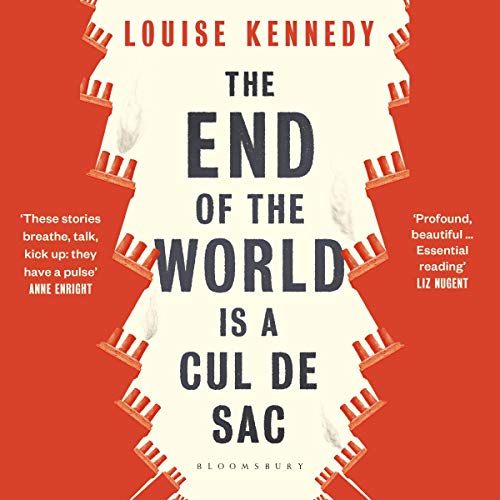 The End of the World Is a Cul de Sac

By: Louise Kennedy
Narrated by: Brid Brennan
Try for $0.00

Bloomsbury presents The End of the World Is a Cul de Sac by Louise Kennedy, read by Brid Brennan.

A Times, Irish Times and Irish Independent highlight for 2021.

The secrets people kept, the lies they told.

In these visceral, stunningly crafted stories, people are effortlessly cruel to one another and the natural world is a primitive salve. Here, women are domestically trapped by predatorial men, Ireland’s folklore and politics loom large and poverty - material, emotional, sexual - seeps through every crack.

A wife is abandoned by her new husband in a ghost estate, with blood on her hands, a young woman is tormented by visions of the man murdered by her brother during the Troubles, a pregnant mother fears the worst as her husband grows illegal cannabis with the help of a vulnerable teenage girl, a woman struggles to forgive herself after an abortion threatens to destroy her marriage.

Announcing a major new voice in literary fiction for the 21st century, these sharp shocks of stories offer flashes of beauty, and even humour, amidst the harshest of truths.

"These stories sing, haunt and inspire laughter.... One of the best collections I've read in years." (Sinead Gleeson)

I loved these wonderful human stories

Wonderful evocative writing. Atmospheric and hypnotic but spoilt by the abrupt endings of every story. The gaps between the stories are so short that each time I had to reel back and try to understand the ending before rapidly launching into the next story.

Modern Ireland with all its strengths and flaws.Captures the lyrical, witty language of Irish women

Such a visceral evocation of real life in modern Ireland. The writing is sublime.
Having read the book I immediately began listening to Brid Brennan’s flawless dramatisation of the voice of Irish women.
I may go straight back and start again.

I Wish I had never got it

This book had an interesting original plot but became sordid and disgusting, a great shame