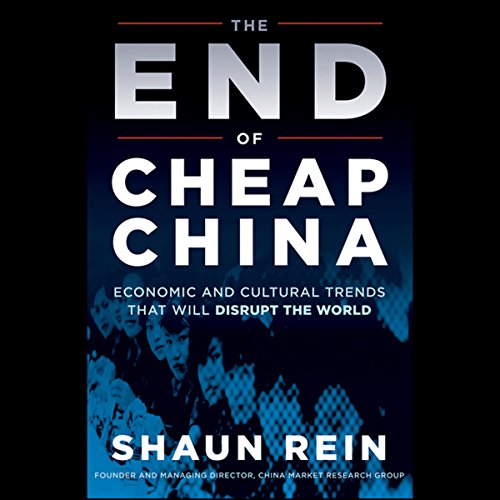 The End of Cheap China

Economic and Cultural Trends That Will Disrupt the World
By: Shaun Rein
Narrated by: Bill Roberts
Length: 7 hrs and 21 mins
Categories: Nonfiction, Economics
4 out of 5 stars 3.9 (29 ratings)

The End of Cheap China

An exposé on how the rise of China will affect the American way of life, The End of Cheap China is a fun, riveting, must-listen audiobook not only for people doing business in China but for anyone interested in understanding the forces that are changing the world.

Many Americans know China for manufacturing cheap products, thanks largely to the country's vast supply of low-cost workers. But China is changing, and the glut of cheap labor that has made everyday low prices possible is drying up as the Chinese people seek not to make iPhones, but to buy them. Shaun Rein, Founder of the China Market Research Group, puts China's continuing transformation from producer to large-scale consumer - a process that is further along than most economists think - under the microscope, examining eight megatrends that are catalyzing change in China and posing threats to Americans' consumption-driven way of life.

Rein takes an engaging and informative approach to examining the extraordinary changes taking place across all levels of Chinese society, talking to everyone from Chinese billionaires and senior government officials to poor migrant workers and even prostitutes. He draws on personal stories and experiences from living in China since the 1990s as well as hard economic data. Each chapter focuses on a different aspect of China's transformation, from fast-improving Chinese companies to confident, optimistic Chinese women to the role of China's government, and at the end breaks down key lessons for listeners to take away.

The End of Cheap China shows:

The End of Cheap China exposes the end of America's consumerist way of life and gives clear advice on how companies can succeed in the new world order.

This was a very interesting read. Instead of focusing of Chinese factories and the human slave labor to maintain its economy, the author writes a general view of the country. There is no longer cheap labor in China, but through it's growth, many of their citizens are becoming the new Chinese by rapid change in its policy. China might not be the next super power as we known today, like the United States, but the country might be the world bank by bailing on other countries that are financially bankrupt. Let's someone else handle human rights issues because as the country progress, their people will have more rights as they expand.

Provides great insight into the next world power and its people. Good for anyone who wants to do business with China